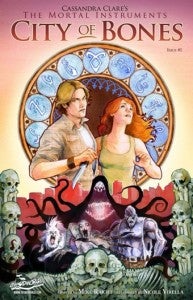 ComiXology announced this morning that they have entered into a partnership with Th3rd World Studios to adapt Cassandra Clare's best-selling The Mortal Instruments trilogy into graphic novel form. ComiXology will publish the series of books as digital-exclusive publications. Mike Raicht, the comics writer best known for work on his creator-owned series Stuff of Legend, will write three issues that adapt the first book in the trilogy. "I'm adapting the first book, City of Bones, of Cassandra Clare's super popular series, The Mortal Instruments. It hits ComiXology today," Raicht posted to Facebook. "Give the 10-page preview a look. The art is great and the story is pretty cool." "The Mortal Instruments is an incredibly successful and engaging series of books; we are very excited to bring this series to a new audience through this collaboration with Cassie and comiXology," said Th3rd World Co-Publisher, Michael DeVito in a press release. Th3rd World Co-Publisher, Jon Conkling, added, "The Mortal Instruments series has a passionate fan-base who care greatly about this wonderful series, so we have been working hard to remain as faithful to the source material as possible." The award-winning best-seller tells a story in which "the handsome Jace introduces fifteen-year-old Clary Fray to the world of the Shadowhunters, a secret cadre of warriors dedicated to driving demons out of our world. She is sure that Valentine, the evil and powerful Shadowhunter, is responsible for her mother's disappearance, but she's about to discover much more," according to the release. A film adaptation of City of Bones is due from Screen Gems next August. Raicht's Stuff of Legend is currently being adapted for Hollywood as well.

The Mortal Instruments Gets Comic Adaptation From Stuff Of Legend Writer