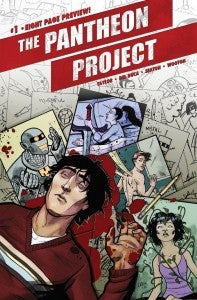 Earlier today, writer Erik Taylor released a preview of the first issue of his forthcoming, self-published comic The Pantheon Project, created by a group of local Denver creators including The Walking Dead's Rus Wooton on letters. The story revolves around a group of teenagers who struggle after suddenly being given the super-powers they fantasized about having as children.

Taylor, of course, was fulfilling his own lifelong dream just by releasing the preview, which marks his first published comic book work. Or he will, once the project's Kickstarter campaign reaches its funding goal. the project is coming down to the wire, with a little more than a day to go and more than $250 still to raise--but having already raised $7,500 in a month, it seems much more manageable.

Taylor joined ComicBook.com to talk about the process of creating and funding the comic.

First off, can you describe The Pantheon Project for us?

The Pantheon Project is a six-issue, full-color comic book series that highlights the trials and tribulations of four teenagers who are all of a sudden granted the super powers they fantasized about having as children. The story is about what happens when this happens to them, how they go about figuring out the mystery behind their radical transformations and what to do with their powers now that they have them. What I really want to get down to is telling a very human story about kids with a lot of responsibility and facing dire circumstances and what to do with these new powers.

I see that there’s a cybernetic warrior from the future in here—if he’s just a kid who’s retroactively getting powers, then how does he come from the future?

[Laughs] I’m glad that you asked that. There is a mythology behind the story that will unfold over the course of six issues. These powers and this new reality are kind of overlaid on top of the pre-existing reality so while the cybernetic organism will refer to itself as being from the future, Oliver Gray (who is Machina) is just coming into this now. When they ask the cybernetic organism how long it’s known this and they ask for more information, it will respond that it has a corrupt data archive.

Which is actually a convenient dodge we’ve seen used in time travel stories before, and it’s always worked well. It’s worked in Booster Gold back in the ‘80s and then in Tom Peyer’s Hourman run too.

Honestly I haven’t read those but when it happens in the story, one of the characters does comment that, “Well, that’s convenient.”

I was trying to figure out how this cybernetic organism, as advanced as it would be, would be in this story and I decided that it would be from the future and that the new reality is kind of overlaid on the pre-existing reality.

What are some of the influences in this particular story? I’m looking at the illustrations and it feels very Tick-like in the childhood flashback.

What I was trying to convey with the opening scene with them as children was a group of kids just dressing up to be superheroes—screwing around in the yard and letting their imagination run wild. My friends and I would do this as kids and just get really involved with these make-believe scenarios that we put ourselves in, so I tried to think of it that way.

The upside-down bucket on his head—the character’s costume when he gets these powers and they discover their costumes—he has a helmet. So I was like, “Well, how would I create a helmet if I was a little kid? Well, I’d probably just take a bucket and put it over my head. Make it work. And when Leila Del Duca, the artist of The Pantheon Project, provided me with this first page, I was laughing because it looked so great. I was really kind of blown away with how she interpreted it.

Yes! That particular one was interesting because that’s supposed to be the cybernetic warrior but if you look at the character in the background, Milton, he’s the one with computer parts attached to himself. So we had to clarify that in the script—that he’s wearing tons of tin foil.

It’s funny because if you look obliquely, if it was a black and white book, you get the “Well, is he a mummy?” thing immediately.

Right, and that’s why—I actually just saw the letters from Rus Wooton who’s lettering the book—and he commented on why his tin foil keeps flaking off. During this whole flashback scene as children, there is a narration that’s kind of guiding the reader through who these characters are.

Then you can consider the possibilities with whether random pieces of his tech will be falling off him in the future like the foil, since that’s just his milieu.

Yeah! He definitely comes apart in my current draft.

Well, you know—robot superheroes have a long history of coming to pieces and usually coming through it none the worse for wear in the grand scheme of things. One of the nice things about having a cybernetic lead is that you can really punish the body and usually have them come out only psychologically worse for the wear.

And Oliver has kind of a joking attitude, he’s the comic relief in kind of the obnoxious jock way. There’s a couple of TV shows that have some influence on how this character interacts with other people, but he’s definitely going to play being that robot to his advantage.

For more on The Pantheon Project, check out our Panel Discussions podcast later tonight, where we'll air the complete interview and more. You can also back the project on Kickstarter to get regular updates leading up to publication and have access to today's 8-page preview.

The Pantheon Project's Erik Taylor on Childish Fantasies and Kickstarter