As previously reported on Comicbook.com, Neil Gaiman made an appearance on tonight’s episode of The Simpsons. Here’s a recap, focusing on Gaiman’s part, so if you haven’t watched the episode yet, be warned that spoilers follow. 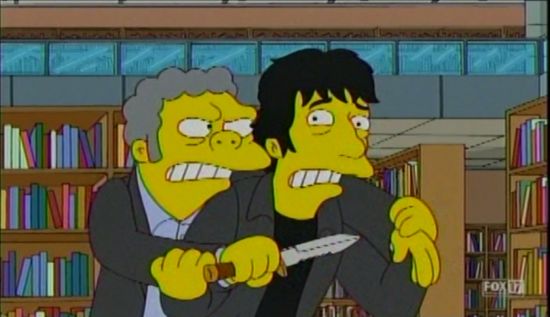 In “The Book Job,” Homer Simpson forms a team to create the next “tween lit” hit. After developing the concept behind a troll story in a Bookaccino’s bookstore, the team is approached by Neil Gaiman. Moe doesn’t recognize Gaiman and holds a knife to his throat, saying, “I don’t care if he’s the guy who wrote Sandman Volume One Preludes And Nocturnes, no one spies on us.”

Luckily for Gaiman, Patty Bouvier recognizes him and intervenes. Bart Simpson lets Gaiman join the team, telling him that “his job is to get lunch and lose the British accent.” 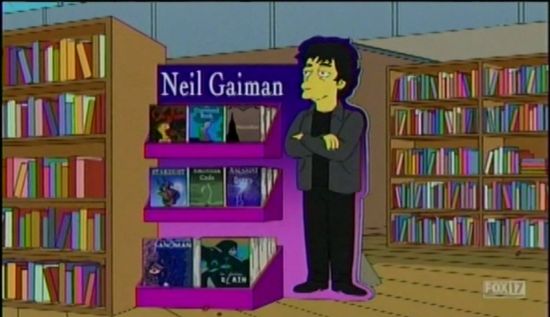 Everyone is celebrating, until they receive an advanced copy of the book, which reveals that the trolls have been changed to vampires. The team is infuriated that the publisher changed their book, and Gaiman explains, “What you’re feeling is called pride of authorship. You thought you only cared about money, but you actually care more about what you created together.” Homer Simpson agrees, “British Fonzie is right. Our story is more important than money.”

The team breaks into the publisher’s building, planning to swap back in the original version at the printers. The team is caught, because it turns out Lisa Simpson tipped off the publisher, because she wanted to see her name as the author on a book.

However, it turns out Lisa Simpson was only pretending to betray the team, and she secretly switched the flash drives so the original version of the book would be printed. Lisa thinks her name is still on the backflap as the author, but when she opens the book, it is credited to Neil Gaiman. The scene switches to Neil Gaiman on a beach. Gaiman remarks, “Poor Lisa, did it never occur to her that there might be three flash drives? I’ve heisted my way to the bestseller list once again, and the most brilliant part is I don’t even know how to read.” 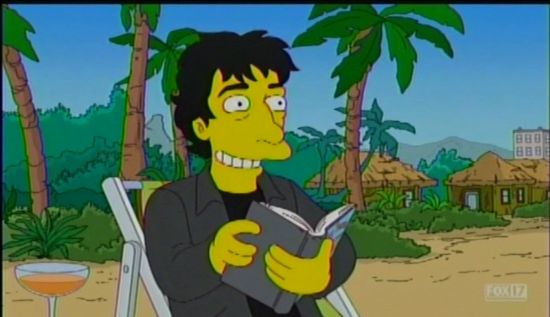