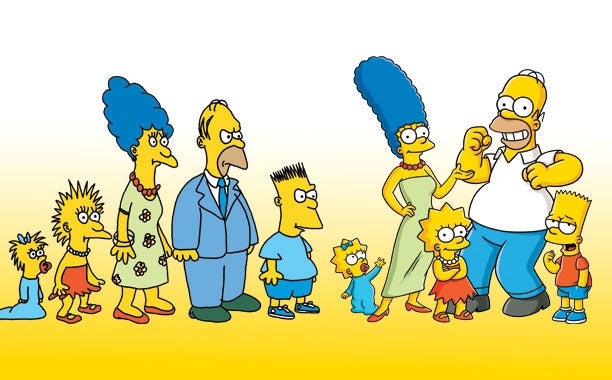 The Simpsons, that crudely-drawn animated segment from The Tracey Ullman Show, will return to FOX this fall when The Simpsons, the slickly-animated long-running animated sitcom, come face to face with their past in the next Treehouse of Horror episode.

Airing Oct. 19, Entertainment Weekly reports that the annual Halloween episode contains a segment that parodies The Others, in which the Simpsons are haunted by another ghostly family living in the house.

That family, of course, is the original Simpsons, with the voice cast adjusting their registers appropriately.

"People remember Dan's, but Nancy's is different too," executive producer Al Jean said. "It was lower-register, and you can see in the difference in this segment. It was really funny to get the interplay [between the two versions of the Simpsons] and for the actors to see the voice evolution. The great thing is we didn't have to ask—we already had the cast hired for the Tracey Ullman Simpsons."

That's as opposed to the cast of Family Guy, with whom The Simpsons are crossing over this fall, or Futurama, whose cast will show up in Springfield a little later in the season. These kinds of guest appearances aren't totally unheard-of; Jay Sherman from The Critic appeared on The Simpsons and King of the Hill's Hank Hill had a cameo, too.

The implication that they were murdered and buried under the house is nothing new, although some fans had speculated prior to that they were simply renamed and relocated, with Lester and Eliza, two kids who appeared in the episode "The Day the Violence Died," appearing to be the original Bart and Lisa.