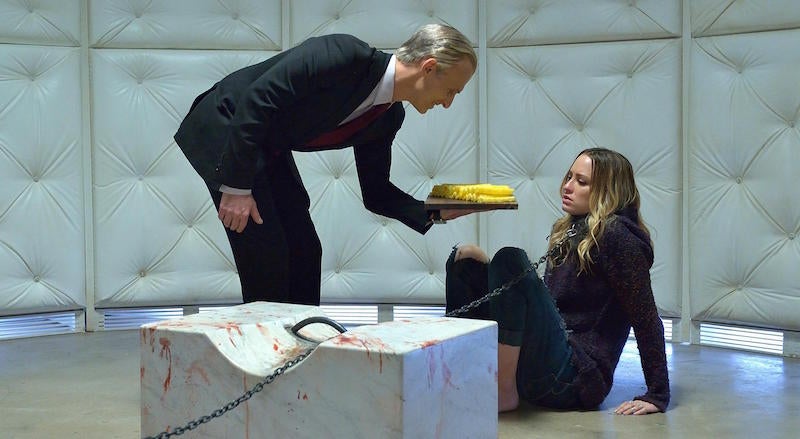 Episode eleven of season two of The Strain, “Dead End,” opens on Dutch (Ruta Gedmintas), still chained up in the cell where Eichorst (Richard Sammel) left her, apparently unharmed. He quickly enters with a man – some sort of security guard – whom Eichorst forces to drink a bottle of schnapps. Then Eichorst immediately "drinks" from him, and then kills him, calling the man a “human cocktail.” Dutch asks him what he will do to her. Eichorst replies, “everything.”

Eichorst continues to taunt Dutch, mocking the way she dresses and generally puts herself together to get people’s attention. He says that the scent of her shampoo reminds him of the perfume of a girl he could never have. Dutch bluntly asks, “so you joined the Nazi party, because you couldn’t get laid?” prompting an Eichorst flashback to 1931 Germany.

We see Eichorst working as a door-to-door salesman, attempting to sell radios and doing a poor job of it. At the end of his work day, his boss berates him in front of everyone – including the particularly cute secretary, Helga. She approaches Eichorst and tells him that she thinks he is bad at selling radios simply because he is “meant for better things.” He asks her out on a date, and she agrees.

The flashback continues later in the episode, where we see the two on their date, totally hitting it off. Helga even leans across the table to kiss him. The date begins to spiral when a man makes an impassioned speech to recruit German men to the Nazi party, and once they leave the restaurant, Eichorst and Helga begin to argue. Unbeknownst to him, she is Jewish. He says he doesn't mind "German Jews," but the damage is done.

In the present, at Rudyard Fonescu’s home, Setrakian (David Bradley) wakes up tied to a chair, after finding the Occido Lumen and promptly being knocked unconscious. Fonescu will not let him go – even after learning that he is the man who saved his life so many years ago. He leaves Setrakian tied up, and says he’s headed for Tahiti. Eventually, Setrakian breaks out. 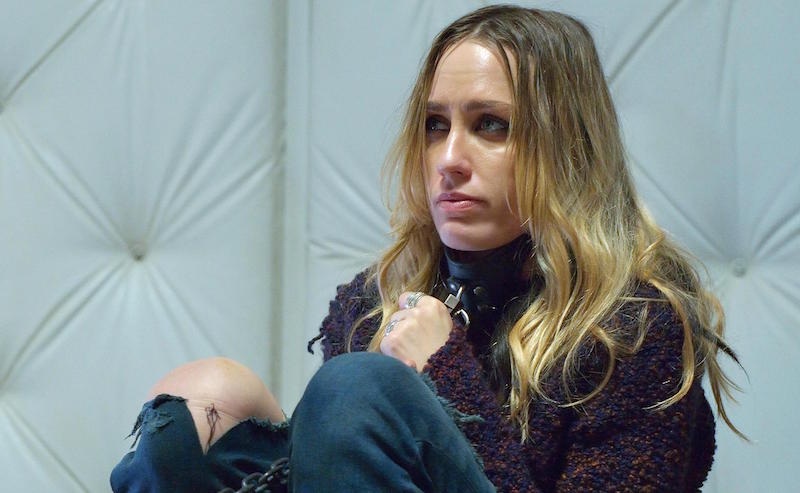 Additionally, Gus (Miguel Gomez) successfully manages to get Aanya’s family through the checkpoint to safety – thanks to the help of Mr. Quinlan’s associate – himself staying behind. Once the family’s vehicle passes the checkpoint, Angel (Joaquín Cosio) gets out as well, joining Gus and opting to stay back and fight.

Fet (Kevin Durand), Ephraim (Corey Stoll), and Nora (Mia Maestro) have been pursuing Dutch since they escaped from the police station, ultimately ending up at the Mayfield Hotel where she was supposedly taken. They find an abandoned police car with Dutch’s hat and know they have found the right place. Half of the hotel has been completely shut down for years, but Fet knows how to get in: through the secret subway tunnel entrance, originally created for FDR.

All the while, Eichorst has been slowly “seasoning” Dutch by feeding her pineapple. At one point he leaves the room, and Dutch manages to sneak the mace out of the pocket of her nearby jacket using her feet. When he returns, he puts lipstick on her – presumably to make her look like Helga. He then tells her to take off her pants and bend over. Eichorst sits on the ground behind her, and his vampire tongue begins to unfurl, when Dutch turns around and maces him in the face. This enables her to steal his key, free herself, and run. Unfortunately, she finds that the exits to the hall of the hotel floor are closed up with bricks.

As Dutch begins to run down the stairs – Fet, Eph, and Nora make their way into the building, ascending the stairs. Eichorst walks calmly down behind Dutch, who eventually finds herself at another brick wall. Fet and the others can hear her screams – and while Eichorst slowly, smugly drags her back to her cell – Fet blows up a brick wall with dynamite and catches up to them. He throws one of his silver grenades at Eichorst, which causes him to bolt. Fet holds Dutch close in his arms, saved.

Towards the episode’s end we see one more flashback, with Eichorst now a high-ranking Nazi official. He is called down to an office at work to find Helga being questioned. She pleads with him to tell the others of their relationship, to help her and her family, who are about to be deported. Eichorst simply says that they worked together once – but she was suspected of stealing money. After work, Eichorst strolls through town, receiving respect from every person he passes, including his now-sheepish, old boss. He eventually passes Helga’s home, finding her and her family hanged. Eichorst keeps a straight face in front of the other Nazis, before turning away, visibly shaken.

The episode ends with Fonescu headed to a mysterious dealer, as recommended by the now-dead cardinal. The dealer is the same man that Setrakian paid to search for the Lumen episodes ago. After inspecting the book, he tells Fonescu that they will definitely be able to make a deal.