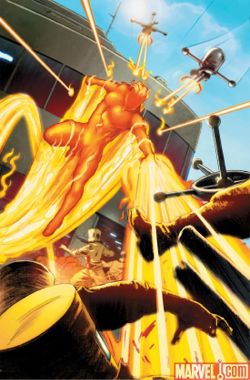 Marvel Comics has announced that The Torch #1 has sold out at the distribution level. To meet demand for the first issue of this new limited series, Marvel Comics will be producing a second printing variant. The Torch #1 Second Printing Variant will feature a cover of the interior art of Patrick Berkenkotter. The Torch #1 is by the creative team of Alex Ross, Mike Carey, and artist Patrick Berkenkotter. Toro is the star of The Torch #1. After returning from the dead, Toro attempts to even the score with the Thinker, the man who killed him. The Torch #1 Second Printing Variant is scheduled to arrive in comic book stores on Wednesday, October 14, 2009. Be sure to check out my Torch #1 review, where I said, "The Torch #1 offers plenty of twists and turns that have me eagerly awaiting the next seven issues of the limited series."

The Torch #1 To Get A Second Printing