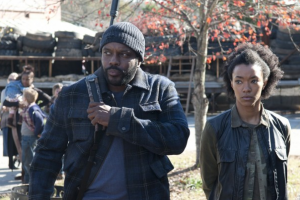 Chad L. Coleman, Sonequa Martin-Green and Emily Kinney, who play Tyreese, Sasha and Beth on AMC's The Walking Dead have been upgraded to series regulars for season four, according to TV Line.

Previously, the actors were recurring characters. While Tyreese and Sasha being added to the prison group is enough to justify their upgrade, many fans may speculate that Beth is being built up to be a casualty in the fourth season, given the fact that her character has been largely a minor player in the hit zombie drama for the last two years.

Kinney, who is also a musician, released a single of her song "The Parting Glass," which she and on-screen sister Lauren Cohan sang on The Walking Dead, last year. She's had a couple of other musical interludes during the third season, which are either a welcome break from the show's tension or the subject of derision, depending on which group of fans you talk to.

All three characters were widely regarded as possible fatalities in the season three finale which just aired, in which one regular cast member was written off the series. David Morrissey, who plays the Governor, was recently renewed as a series regular for the fourth season as well.

Yashahime Finally Confirms Who the Mother of Sesshomaru’s Daughters is

Among Us Gets New Merch, Official Plush Coming Soon

The Promised Neverland Reveals The Secret Origin Of Its World