With the third season premiere of AMC's The Walking Dead looming this weekend, Robert Kirkman is a pretty in-demand guy. At New York Comic Con, he could hardly make his way around the Skybound booth, conducting interviews with iFanboy and ComicBook.com in between handfuls of fans who wanted his time for signatures, photos and conversation--and that's just in the course of fifteen minutes.

We stole him off the show floor and sat down with him at the Skybound booth to talk about Invincible, Thief of Thieves and (of course) The Walking Dead. Want to know a little bit about how Kirkman plans to end The Walking Dead? Read on...

The thing everybody's talking about is, of course...The Death of Everyone in Invincible, right?

How's it work? Are you trying to up the ante? Becuase we had Mark Grayson at death's door for a while...

He gets beaten up a lot, that's true.

So, is it difficult? Obviously you're looking across the aisle and Marvel wants to kill Spider-Man this week, and you've got this book that's been consistently excellent but you can't count on it to sell 150,000 issues because you say, "This month...Someone DIES!" So is this having some fun with the readers?

Invincible does, to a certain extent, tell stories that can be somewhat meta. It's a very compelling story that we've been building to for years but at the same time, it's like, "It's the death of everyone!They kill one character, we kill all the characters!" I like having fun with that stuff.

Invincible is a superhero comic that, to a certain extent, is competing with those big superhero comics--and so I like to acknowledge that and find ways. So yeah, it's definitely poking fun of that to a certain extent but at the same time it is upping the ante, it is the natural evolution of the kind of stories we've been telling in Invincible and it is a very important character story that deals with who Mark Grayson is and what he's learned over time and what kind of person he's going to be from here on out. And so it all has a basis in character which is important. 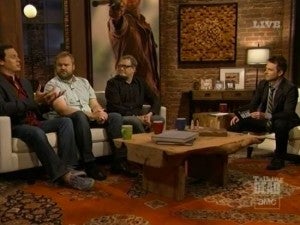 Do you think because of both your reputation and just being an independent creator who's not answering to anyone that it kind of throws a spotlight on that kind of thing? People saying, "Well, it's Kirkman, so he can do whatever occurs to him to do."

So it is a little bit difficult at times to make sure that readers don't know what to expect and they don't see the outcome of things coming but it's great to have the freedom to do that.

Thief of Thieves is obviously the big success stories of Image this past year, and with that coming out right on top of Saga, it felt like there was something really big happening there.

How's everything going in terms of working with other writers more in this book than you've done before?

It's a lot of fun. I think it's really cool that we're treating it like a television writers' room where I come in with a framework in terms of who people are and what's going on, and some general plot notes and I work with them to kind of flesh those out and get new ideas from them. It's great to be able to bring all those writers in and have them craft story with me and really make it a team effort.

One-upmanship is a really good thing that happens in writers' rooms, this friendly competition going on where everyone is trying to outdo each other and that I think drives stories in a really good direction and can make for some really compelling stuff. I think it's great that all these different writers are able to craft these stories and add their own experiences into the mix and hopefully make it a better comic.

So do you get that on The Walking Dead? Other writers who go, "I know he lasted in the comics, but screw Kirkman! I'm killing this character now!"

[Laughs] Doesn't really happen. I mean, most of the story is mapped out verbally as a conversation while we're all in there and so noe one's really off on their own killing characters or anything like that. But there is one-upmanship on like "Oh, I killed a zombie this way" and "Oh, this has never been seen before" and "Oh, have you ever seen a zombie do this?" There's a lot of cool stuff like that that makes it into the show and makes the show better.

You've said for years that you can see yourself doing The Walking Dead like Savage Dragon--where you can imagine doing it until you die. Practically, it's obviously different but is that the same with the TV show? Is that something that you don't see yourself getting bored of?

No, I mean...I don't know how many years the TV show will run--I mean, I'm hoping that it will remain successful and as long as it's successful and people are watching it and AMC wants to continue doing it, then I'm definitely in it for the long haul. I can't see there being a television show that I'm not involved in. I think that's something that I wouldn't really be into.

So I'm having a lot of fun working on it and I think that people are really digging it, the actors are having a good time and all the writers really dig it so I think we'll keep going for as long as we can.

That said, television shows don't last forever. There's never been a TV show that lasted "forever." So I am kind of hoping that we'll be able to continue the comic book month to month as the show exists and I hope that the comic book outlasts the show so that there are more stories that can be told after the show is wrapped up, whether that's ten years or twenty years from now.

To that end--obviously the show exists in a different continuities and they don't spoil one another. Do you guys have an endgame in terms of what to do when the TV show ends so that people don't abandon the comic, thinking they know how it all turns out?

I think it would be impossible for any way that the show would end to spoil the comic. I that think they are both very separate.

I have certain endings in mind for the comic book. I have different events that I want to get to and if I haven't gotten to them yet when the show is wrapping up I'm just not going to tell anyone in the writers' room what my idea is for how I would wrap up the comic book. If they come up with anything similar, I'll be like, "I don't like that, let's not do that," and try to steer them away from it. So I think it'll be pretty easy to keep them separate but that is something that has occurred to me, that I have thought about.

The Walking Dead Creator Robert Kirkman On The Series's End