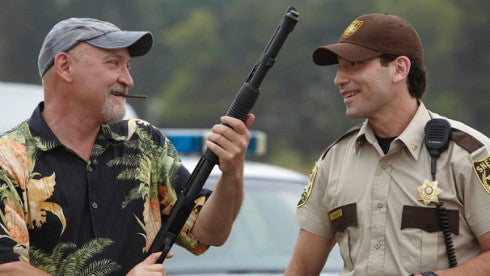 Frank Darabont, the filmmaker who first brought The Walking Dead to the screen at AMC, has apparently not yet forgiven and forgotten his firing at the beginning of the show's second season.

Asked about his feelings on the breakup during an interview in support of his new TNT series Mob City, Darabont told Variety, "There’s a deep commitment and emotional investment that happens when you create something that is very near and dear to you, and when that is torn asunder by sociopaths who don’t give a s--t about your feelings or the feelings of your cast and crew because they have their own reasons to screw everybody, that doesn’t feel good."

Not content with just the "sociopaths who don't give a s--t" quote, Variety went on to ask whether Darabont watches the top-rated series these days. He, uh, said no:

"Oh God no, why would I?" Darabont asked. "If the woman you loved with all your heart left you for the Pilates instructor and just sent you an invitation to the wedding, would you go?"

Darabont, who is reportedly working on developing Outlook Hotel, a prequel to The Shining, in addition to running Mob City, continues to draw praise from those who worked with him on the series.

"Yeah, listen. Probably the most iconic moment in the first episode where Rick finds the half-torn-apart girl in the park–the reason that worked is that you actually did feel compassion for this person and Andy’s performance and that moment that was so brilliantly directed by Frank Darabont, it really set the bar for us," Emmy-winning effects guru Greg Nicotero told us at San Diego Comic Con International in July.