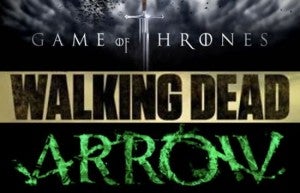 While it might not exactly be described as an honor, TorrentFreak has released their annual list of the most pirated shows of the year. Making the list in 2013 are several shows that are among the favorites of comic book fans.

The remaining TV shows among the top ten most pirated shows of 2013 were The Big Bang Theory, Dexter, How I Met Your Mother, Suits, Homeland, Vikings, and Arrow. The Big Bang Theory is the highest rated series on network television, so it's not surprising that it would fall in the top ten. Arrow, which airs on The CW, is one of the biggest surprises on the list. It's presence of the list shows that its popularity goes far beyond just the viewership that tunes into The CW every week.

The Walking Dead, Game Of Thrones, & Arrow Among Top Ten Most Pirated Shows Of 2013