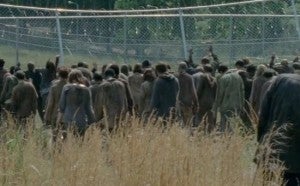 AMC announced today that the network is in the initial stages of developing a The Walking Dead spinoff, which they're calling a "companion series," for an on-air target of 2015.

The network also recently announced a Breaking Bad spinoff titled Better Call Saul, while cancelling The Killing. It seems that the world of AMC's original programming is getting more narrowly-focused.

The Walking Dead's  Robert Kirkman, Gale Anne Hurd and David Alpert are on board as executive producers, with AMC Studios set to produce. Don't be surprised if Alpert gets tapped as showrunner, especially since Scott Gimple, who's doing that job for the main series, has had the job for all of about ten minutes.

“Building on the success of the most popular show on television for adults 18-49 is literally a no-brainer,” said Charlie Collier, AMC’s president and general manager. “We look forward to working with Robert, Gale and Dave again as we develop an entirely new story and cast of characters. It’s a big world and we can’t wait to give fans another unforgettable view of the zombie apocalypse.”

“After 10 years of writing the comic book series and being so close to the debut of our fourth, and in my opinion, best season of the TV series, I couldn't be more thrilled about getting the chance to create a new corner of The Walking Dead universe,” said Kirkman. “The opportunity to make a show that isn't tethered by the events of the comic book, and is truly a blank page, has set my creativity racing.”

As to what corner of the universe that might be--at this stage it's anyone's guess. It seems most likely that the series will spin off from The Walking Dead, so perhaps we're in store for either a major divergence from the comic book canon (maybe The Governor or Tyreese survive to leave the group and form their own?) or perhaps the Daryl spinoff that's occasionally been batted around. Most likely, though, it will revolve around someone introduced this season, likely within the group from Woodbury that Rick has saved and brought to the prison.

Season four of The Walking Dead returns to AMC on October 13.

The Walking Dead Gets Spinoff: Spread the Dead