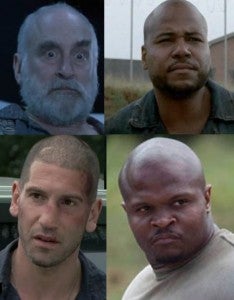 While we’re big fans of The Walking Dead here at Comicbook.com, we couldn’t help but notice a disturbing trend that has developed on the hit AMC series. Yes, we’re talking about how the show’s producers seem to have it in for bald men.

While there have been a lot of characters killed on The Walking Dead throughout the three seasons, a disproportionate number of main character deaths have been bald men. We first noticed this disturbing trend when Dale Horvath was killed by a walker during season 2. At the time, it wasn’t obvious, because Dale usually wore a hat, which hid the fact he was going bald. We were unsure if the producers were targeting bald men or just hat-wearing men. However, things became more clear a couple of episodes later, when Shane Walsh was killed by Rick Grimes and then killed again by Carl Grimes.

While not naturally bald, Shane had recently shaved his head, in essence becoming a bald man. Could it be that Dale always wore the hat because he was trying to hide from the show’s producers that he was going bald? Did Shane purposefully shave his head because he wanted off the show?

Even though some might have argued after season 2 that the death of two main characters who were both bald was merely a coincidence, it’s hard to overlook what has transpired so far in season 3. The first member of Rick’s group killed off in season 3 was T-Dog, the only remaining bald man of the group.

Sure, in the same episode, the bald prisoner Oscar helped save Rick, thus earning his place in Rick’s group. At first, we thought that producers might have brought Oscar into the group, as a way of insuring that bald men were still represented. However, a couple of episodes later, Oscar was killed off in a gun battle with the residents of Woodbury.

It’s hard to overlook the deaths of four bald or balding cast members during the last season and a half. Some might argue that there have been characters such as Lori Grimes, who had a full head of hair, who have also been killed off. However, when you look at the ratios of non-haired to haired deaths, it’s clear that producers find bald men to be expendable.

Also, Lori was a woman, and we’re unsure if this apparent discrimination against the bald applies to females as well. While Carol has survived several close calls, she is technically not bald and just has short hair. Just to be the safe side though, it would probably be prudent for cast members to put a wig on baby Judith.

The Walking Dead: It’s Tough To Be A Bald Man In A Zombie Apocalypse