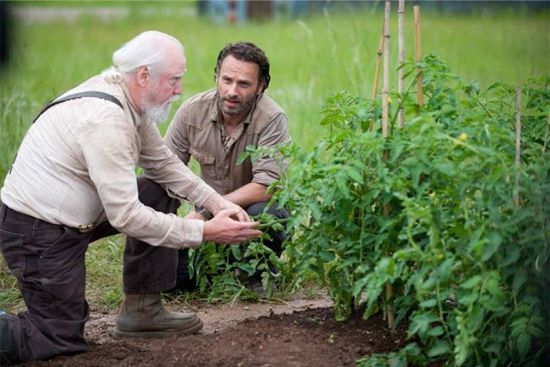 When the first previews starting airing for The Walking Dead Season 4, there was one question that was on every fan’s mind. How the heck did Hershel Greene get his leg back? Of course, it was eventually shown that Hershel has an artificial leg, but it was never officially explained on the show how Hershel got a new leg.

The Talking Dead did offer up an explanation, explaining that Hershel’s prosthetic leg was found on one of the group’s runs. However, the Walker Stalkers’ podcast put the question of the mysterious new leg directly to Scott Wilson himself, who plays Hershel on The Walking Dead.

“As far as I know, it hasn’t been explained, but I think the assumption is they came up with the artificial leg at some point during the intervening time. Because the whole prison’s changed, it’s more of a community. Certainly, you can see that at the beginning of the show. Rick is growing crops and raising pigs. It’s been quite a bit of time that’s gone by. [It] certainly gives enough times for Hershel to have worked something out or to have found something or someone bringing him a leg back and him figuring a way to make it work.”

Wilson added, “It’s interesting it’s created some interesting situations. In the first episode, when Rick and Hershel were at the tomato plants, they dug a hole I put my leg in. And then they had this artificial leg sticking out the back. So in essence I was glued to that spot while we were shooting that scene. It’s created a lot of situation like that from the time he lost his leg.”

The Walking Dead airs on Sunday nights at 9 PM ET.

The Walking Dead: Scott Wilson Explains How Hershel Got His Leg Back