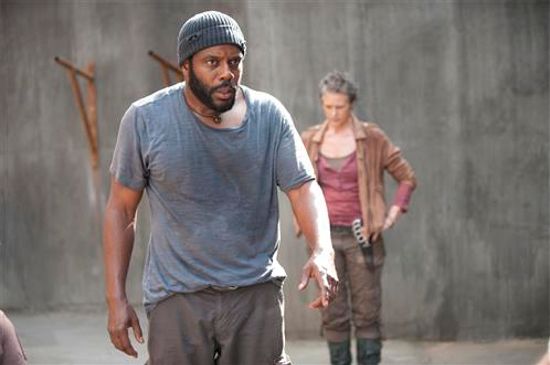 This article contains spoilers for The Walking Dead Mid-Season Finale. If you pay close attention to The Walking Dead, there is little that the writers do without a reason. If a scene jumps out at you as unusual, it’s more often than not that the scene is setting up something that will happen later.

One of the things that fans had been waiting for during the Governor-themed episodes was seeing Daryl and Tyreese’s reaction when Rick told them about Carol. During the Mid-Season Finale, we saw Daryl react with first denial and then acceptance. However, when Rick and Daryl went to tell Tyreese, he cut them off so that he could show them the dissected rat that he found.

When Tyreese speculated that whoever dissected the rat was the same person that killed Karen and David, Rick started to tell him about Carol, but they were interrupted by The Governor attacking. It’s probably no coincidence that there was a series of events that prevented Rick and Daryl from ever telling Tyreese about Carol.

Now, that Tyreese is separated from the rest of the group, except possibly Lizzie and the other kids, he also probably won’t be learning the truth about Carol anytime soon. Of course, Tyreese not knowing about Carol sets up the perfect scenario for Tyreese and Carol to run into each other outside the prison.

In a way, Tyreese owes his life to the kids that Carol trained. If Tyreese saw Carol outside the prison, he would probably embrace her, because he felt she was such a good person that he asked her to watch over his sister while she was sick. On the other hand, Carol probably wouldn’t know how to react initially to Tyreese, because she would likely be wary of what Rick might have told him.

However, if Tyreese is still with Lizzie and the other kids, Carol’s desire to be reunited with the children might overcome any fear she has of Tyreese. Having Tyreese, Carol, and the kids working together to survive outside the prison would be just the sort of interesting and twisted path that The Walking Dead writers would likely go down.

Imagine if Carol wound up saving Tyreese's life while they were together. And then just imagine the look on Rick's face if the group then re-united, and he saw Carol and Tyreese surviving together. Would he still tell Tyreese what Carol did?

The Walking Dead Spoiler: The Twisted Way Carol Might Return