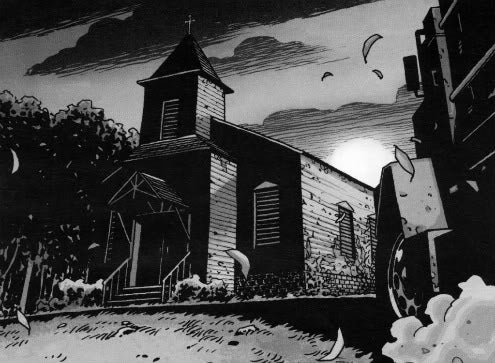 Last week when Father Gabriel was introduced on AMC's The Walking Dead, Talking Dead that night looked at his church, explaining that it was built from scratch for the show and was not an actual church.

Why? Well, Talking Dead this week tells us it's because of tonight's episode.

Aside from the fact that any functioning church would likely object to the "four walls and a roof" line, there's the added fact that actress Lauren Cohan described the brutality in tonight's script as "hair-raising." That it had to take place inside of the church, the show told us, was a big reason behind not shooting in a practical location.

The Walking Dead airs Sundays at 9 p.m. ET/PT on AMC, followed by Talking Dead at 10 p.m.

The Walking Dead: Tonight's Slaughter Is Why They Had to Build Their Own Church