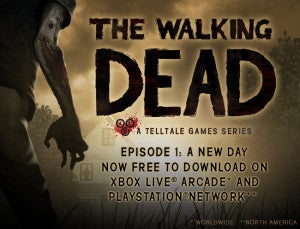 Playstation Network and Xbox Live Arcade users can download the critically-acclaimed first episode of The Walking Dead from Telltale Games for free.

Starting today, The Walking Dead Episode 1: A New Day is available at no charge on the popular gaming networks ahead of the release of the next season of the best-selling series.

Here's what Telltale had to say about it:

Whether players want to catch up on 2012 Game of the Year The Walking Dead for the first time, revisit the series on another platform, or perhaps share the experience with friends and family, it's never been easier to do so.

The Walking Dead Season Pass on PlayStation Network (North America), which covers all 5 episodes in the Season One journey, has also dropped to just $14.99 USD.