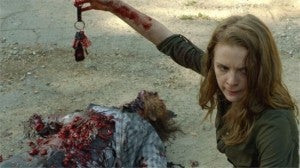 AMC has just released their newest Walking Dead webisodes: The Oath. In the three webisodes (7 to 10 minutes each), the lone survivors of a massive walker-attack, Paul (played by Cowboys and Aliens‘s Wyatt Russell) and Karina (Ashley Bell, The Last Exorcism), speed across the countryside, frantically searching for an aid-station, as one of them slowly bleeds out from a wound.

Finally coming upon a hospital that has not been overrun, at first feels like a blessing, but could soon turn to misfortune, as a seemingly benevolent doctor (Ellen Greene, Little Shop of Horrors) may hide a darker agenda.

In the first part of The Oath - "Alone," Paul and Karina escape their ravaged and overrun camp, but a mortal injury sends them on an urgent mission to find medical help.

In the second part of The Oath -- "Choice," Karina encounters an unexpected survivor in the medical facility as Paul's health deteriorates.

In the third and final part of The Oath -- "Bond," Karina and Paul are forced to make life and death choices.

The Oath was executive produced, directed and conceived by Greg Nicotero.