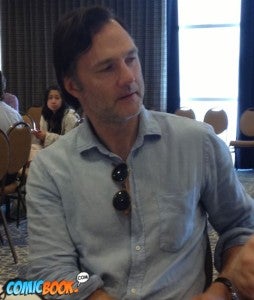 David Morrissey, who plays The Governor on AMC's The Walking Dead, has signed on to play the lead in the network's new pilot Line of Sight.

The series centers on Morrisey's character Lewis Brent, a National Transportation Safety Board investigator who survives a plane crash.

“We are huge fans of David Morrissey and are glad he’ll be doing double duty for AMC viewers through his work on The Walking Dead and our pilot for Line of Sight, both of which are produced in Atlanta,” AMC told Variety.

The magazine also tried to get a comment on how Line of Sight might affect The Governor's storyline on The Walking Dead. With both series shooting in Atlanta, they might be able to make it work for a season. Morrissey was signed on as a series regular for The Walking Dead's fourth season.

When Jon Bernthal's Shane was written off the series, the first inkling that it was coming was that Bernthal signed on to play the lead in former The Walking Dead showrunner Frank Darabont's new series Mob City on TNT.

Demon Slayer Creator Is Reportedly Undecided on Their Next Series