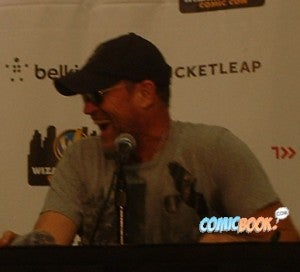 On yesterday's episode of the Why I Love Comics podcast, AMC's The Walking Dead star Michael Rooker addressed rumors that he may be playing Rocket Raccoon in Guardians of the Galaxy by saying that it would be "a dream come true" to work with filmmaker James Gunn again, and encouraging fans who'd like to see him in the role to let Gunn and Marvel know.

"You know, I don't know if the Rocket Raccoon character's gonna really be right for me," joked Rooker. "I mean, I eat raccoons so I don't know how that's going to work. I don't know if that's going to work well. But you never know--James Gunn is an awesome director and very creative in his casting in the projects that he's involved with so we'll see. For me, it would be a dream come true to get to work with James Gunn again so I've got my fingers crossed.

"Start out a grassroots campaign, guys. First of all let him know that you want me in the [movie] and you never know--maybe they'll listen. We'll see about that and I'm very happy for Mr. Gunn. He's going to do a great job and bring it to life and it would most definitely be an honor and a pleasure to work with Mr. Gunn again, and on a project like that? Oh, come on, that'd be awesome. But right now, they haven't called, they haven't made an offer or anything like that, so we'll play it by ear and see what happens."

Of course, the "rumors," such as they are, are so far just fan hopes that took shape after Rooker was asked about the role and expressed a willingness that verged on interest.

“Oh, yeah. Most certainly,” Rooker told an interviewer when asked if he’d be interested in the part back in October. “I know that James Gunn is doing it. He is directing it, and he is re-writing it. He is a very loyal director. He is a very loyal writer, when it comes to working with people that he knows and loves. He really appreciates the efforts that each actor puts into these roles. And I would be very honored and pleased to work with James Gunn again.”

So--who's in charge of that grassroots campaign?

Rooker has done voice acting before, most notably in video games including an upcoming game based on AMC's version of The Walking Dead which features Merle and Daryl Dixon.

The Walking Dead's Michael Rooker: Rocket Raccoon Would Be a Dream Come True