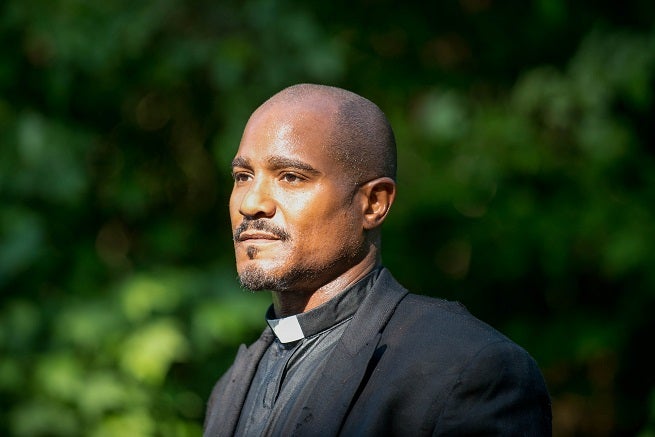 During a new interview with Entertainment Weekly in support of tonight's episode of AMC's The Walking Dead, actor Seth Gilliam -- Father Gabriel Stokes on the hit zombie drama -- explained a bit about his character's journey this week which sheds light on (or, really, confirms suspicions about) the teaser clip AMC released during Talking Dead tonight.

In the clip, which you can see below, Father Gabriel visits the site of the Terminian's "Bob-B-Que," seeking answers. Some had wondered, notably the co-hosts on Talking Dead, just what was going on in the scene, but according to Gilliam, it's exactly what it looked like.

"I have not actually seen the episode yet so I am not sure what is in and what is not, but he did have some lines where he was going out really to see if what was happening at the school really went down," Gilliam said of tonight's episode. "Have people really reverted to cannibalism? Are they trapping other human beings and eating them? So I think it’s more of an exploratory mission than an escape. And also, for someone who is not going to fight, the other alternative is fleeing, so having a little escape route, whether he is intending to leave for good or not, is just somewhat comforting for him."

Of course, what his course of action might be once he's actually discovered that Rick and his crew were telling the truth is anybody's guess.