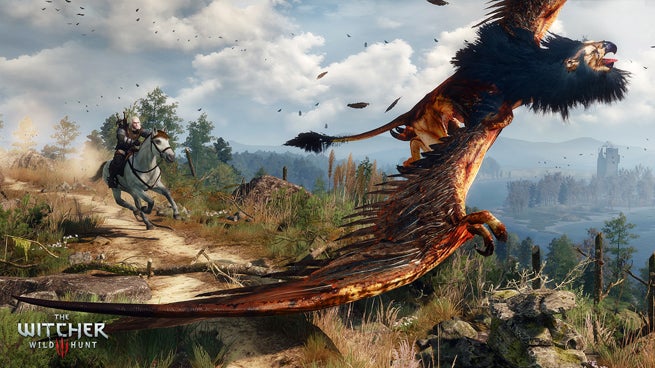 The world of The Witcher has expanded greatly, despite a four-year gap between The Witcher 2: Assassins of Kings and The Witcher 3: The Wild Hunt's May 19, 2015 release. Multiple novels and a comic book series helped fill the void between each installment, though most gamers likely didn’t even realize that the stories came first.

Story comes first in the new installment as well, according to developers CD Projekt RED. The Wild Hunt brings players further into Geralt of Rivia's world as he embarks on his final adventure. With an open world, gamers can experience the story in their own unique way. When the game hits in May, players will have plenty of time to learn the ins and outs of Geralt’s journey, with 50 hours of primary story and another 50 hours of side quests.

At a recent press event in New York, ComicBook.com sat down for a detailed conversation with Marcin Iwinski, co-founder and joint CEO of CD Projekt RED, and Michal Platkow Gilewski, head of global communication for the company. The pair’s enthusiasm for The Wild Hunt radiated across the table, which happened to be covered with a custom felt gaming mat representing one-third of the game's playable map. While the duo readily talked about the importance of story and the technical improvements that new generation consoles have provided, they also made bold promises. For instance, Iwinski told us, “You won’t find two identical quests within this fifty hours of side quests.”

For more on this, on how players will experience the story but still go their own way, and what goals they hope to achieve, we turn to Iwinski and Gilewski.

Gentlemen, one of the hard things about making any sequel, let alone the third in a series, is finding a way to make the character feel powerful enough for returning players, but also still have his own unique challenges. How did you approach that challenge when starting on The Witcher 3: The Wild Hunt?

Marcin Iwinski: If you look at the previous two games, The Witcher and The Witcher 2: Assassins of Kings, it really shows our path of development. We definitely developed strongly in the storytelling aspect, but I would say it is important that people do not feel “lame” in a way. They don’t want to start as, “Oh I’m the guy learning how to swing a sword for the first time.” That’s definitely not the case. We see it in Caer Morhen [the homebase of the Witcher and the location of the prologue, which also serves as a tutorial to the game]. The most interesting and intriguing part is the story, and how we tell it in the open world. When people start playing the game, they’ll see The Witcher’s magical abilities, his five spells, and his two swords: silver for monsters, and steel for human opponents.

So if you’ve dug into the lore, that’s great. If you haven’t, it’s a totally stand-alone game. You don’t need to know Witcher 1 or Witcher 2 to jump in and feel strong as Geralt. We do hope that if you come in as a newcomer to The Wild Hunt, that you’ll go to the other games, or to the books, or to the comic books.

Michal Platkow Gilewski: …but out of curiosity, not because it’s needed. We knew that this is the game for newcomers, because of the new platforms, because it’s next-gen, we knew this game would be for a bigger audience, as well. So we designed it in a way that you can easily jump in and start from this one.

Iwinski: Yeah, it’s worth mentioning that there’s a whole next-gen audience – so PlayStation fans who didn’t play Witcher 2 because it wasn’t on PS3 can jump in. There’s a whole new audience that will be playing this game and we want them to have a smooth ride. Having said that, for the true fans that have played the previous games – on PC, you’ll load your previous saves in for your own story. On the consoles, fairly early in the game, you’ll be able to make choices to reflect your gameplay decisions in The Witcher 2. We’re really trying to cater to both crowds.

Also, if you know the lore really well, you’ll understand the motivations of certain characters better. But it’s really – you don’t need that to enjoy the game. Maybe you’ll replay it after reading the books or playing the first two and you’ll say “Oh, now I know why that guy is such an evil guy…” 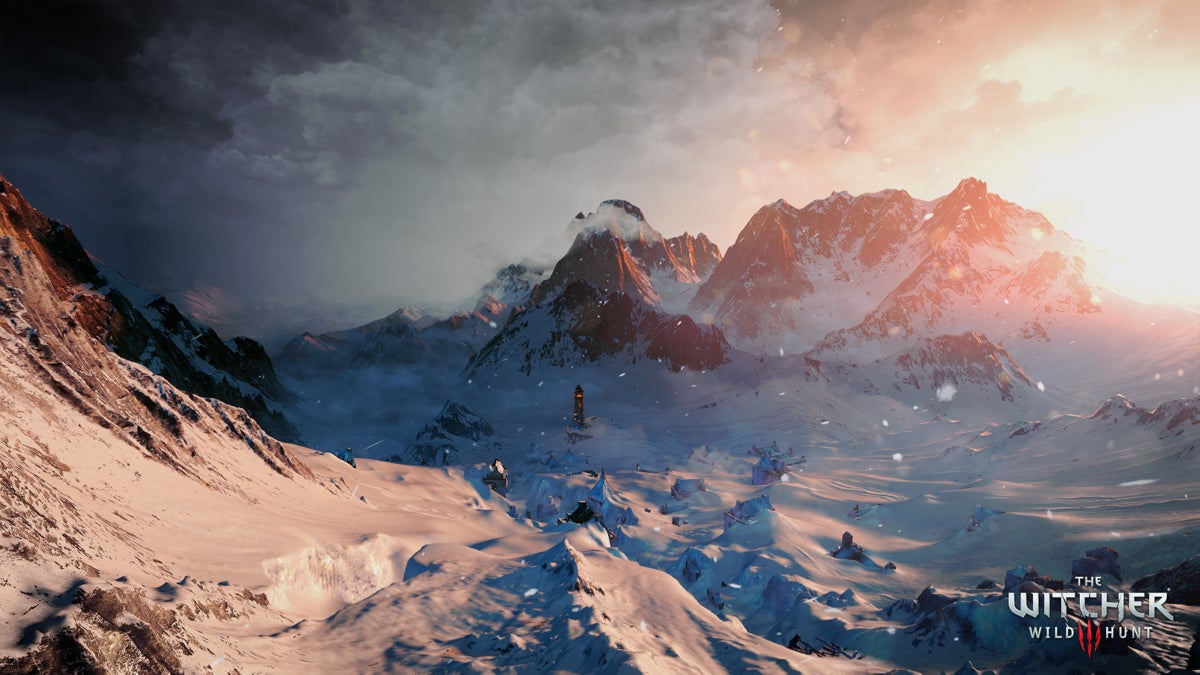 Right. With story being so important to you, but also adding in the open world aspect, those things seem like they could clash a little bit. What’s the balance when crafting a strong linear narrative that also gives players the opportunity to explore on their own?

Gilewski: When we announced what we were working on, people started asking the same question: “Do we want to go open world, or do we want a story-driven game?” Up until now, it was one or another. We believed that if we work hard – and believe me, we had to work very hard on this – that you could connect these two f***ers together! (laughs)

We believed you could make a story-driven game in an open world, and believe me, it is possible!

Iwinski: Yes, exactly. As Michal said, you always have to focus on priorities, yes? It’s an open world, so there’s the freedom of exploration, but the game is still about the story. For example, in my gameplay style, I played about 20 hours into the game. What I realized, when I finished the prologue – the prologue is a little bit more closed, in that five hours, you learn the tricks…

Iwinski: Then it’s go on, have fun! I started playing the story, but then I got side-tracked, I started exploring, and swimming in the rivers, and finding these random encounters. Then I started these small sub-quests, which are theoretically meaningless in the scale of the story: I helped a lady with some old chapels that were being destroyed by bandits. But suddenly, over the course of doing this, the story started waving at me, with someone saying, “Hey, this guy over here says you need to do this next!” So it’s built-in that way. It’s a very open world. There’s a prominent element of monster hunting, which I think we’re doing that really well for the first time. A Witcher is a professional monster hunter! He’s supposed to take these jobs from the village and townfolk and saving them--for money--from Monsters! So all this is there. You can spend hours and hours just running around taking small assignments and missions from villagers. But the story will tell you, “Hey, a big thing is happening over there, and you should be there for it!” The story is waiting, and we let you explore however you want to.

Gilewski: We designed the story in the way that it’s not a path, from A to B to C. There are events that are happening in different regions of the world. This way, whatever you are doing, you are somehow touching the story. Either the region is touched by this, so you’ll feel the story in a side quest. Sometimes the line between the side quest and a main quest is so blurred you’ll start to feel the story inside it before you finish up another. Wherever you go you’ll progress the story, either a bit or a lot. 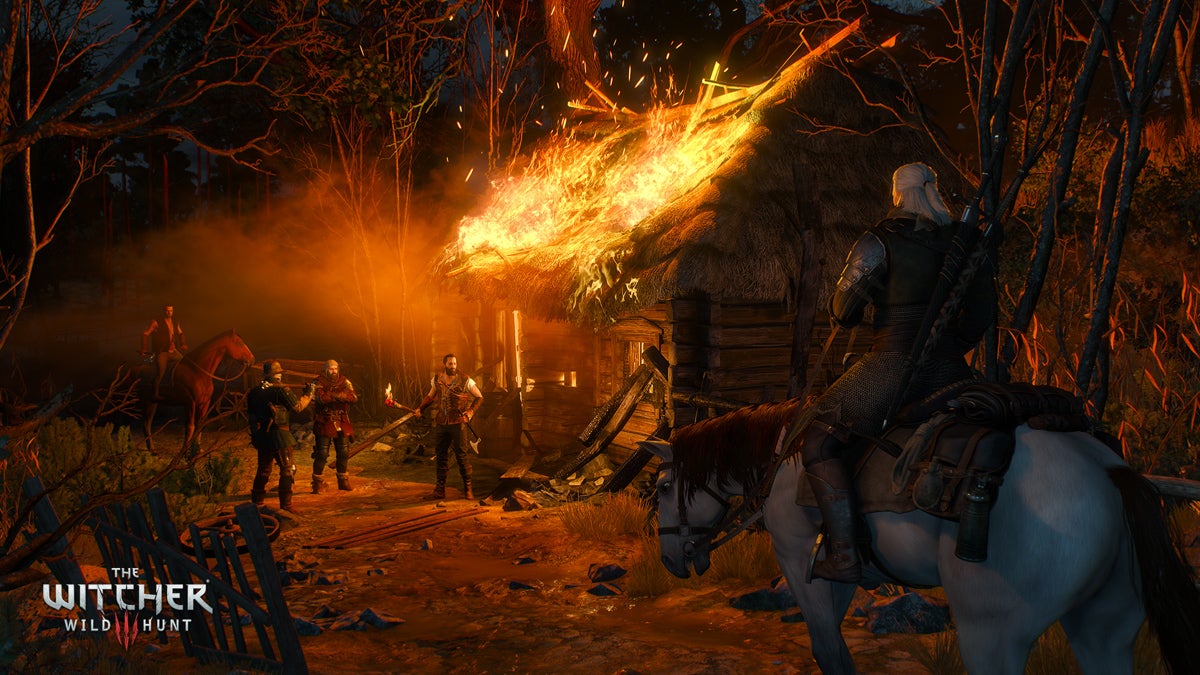 One of the difficult things about a 100 hour RPG is that side quests usually fit into one of about 3-5 categories, and you’re then essentially playing the same mission over and over and over again.

(laughs) So what have you guys done to combat that?

Iwinski: We knew, and Adam, the head of our studio said that, he doesn’t want, he doesn’t like, and doesn’t want to see any “fedex” or “fetch” quests (laughs). “Go and collect 30 mushrooms and come back!” So every quest, even the very tiny ones, are designed from scratch with some kind of story, tease, twist, rumor, or whatever.

You won’t find two identical quests within this fifty hours of side quests.

Gilewski: Yeah. First of all, they are rooted within the story. Every single side character, every NPC, even the theoretically unimportant ones, they have a backstory. They have a motivation, and there is a meaning to them. Of course, we add the sense of humor; we had a maturity to the storytelling.

My favorite quest from the prologue is about a frying pan! A lady is asking Geralt, a monster slayer and professional bad ass, “Hey, I lost my frying pan, a guy took it and went into my house and I can’t go in after him.” So she’s the witness of this quest. But then there are layers to it, when you find out some important things for the main story, that give you hints to the main story. So even something small like that, we tried to connect it, and spent time writing every bit of the story to make these right. That is the beauty of this game. 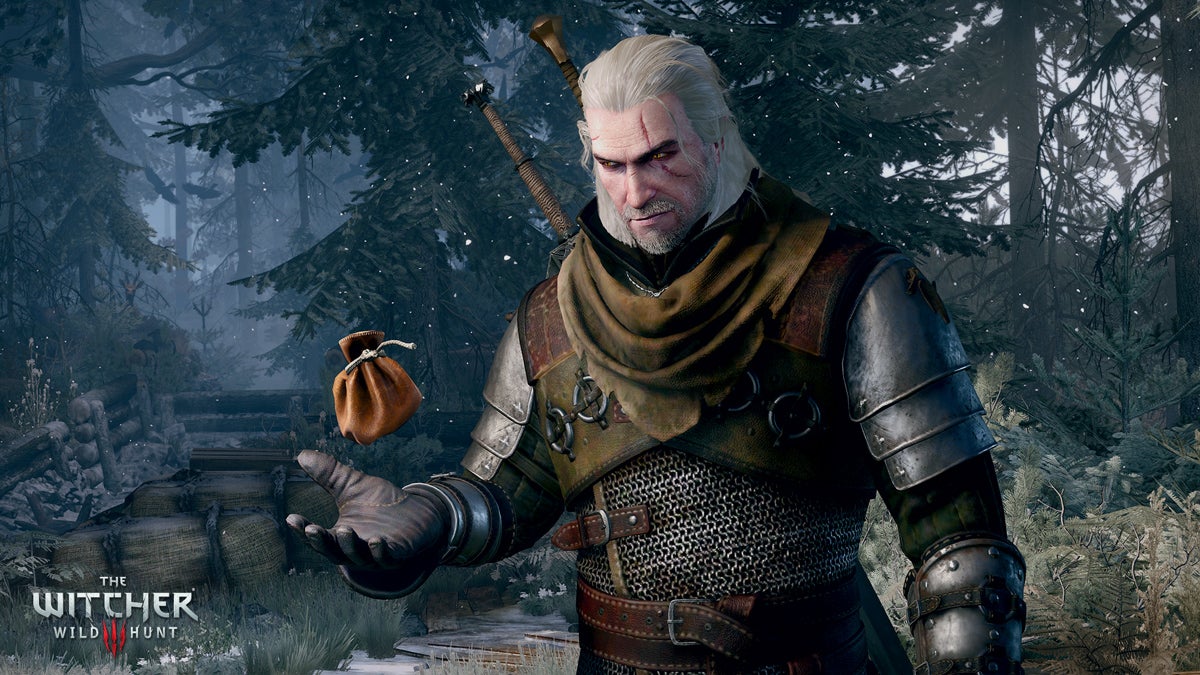 With any RPG, you obviously want people to craft their own experience, and with an open world, even more so. What do you hope is the core experience that people see in Geralt to allow them to enjoy the game?

Iwinski: I’ll say, from my perspective, when I’m playing a game – and I mostly play RPGs and story-driven games – I want my emotions to be attached to things in one way or another. I want to feel that what I’m doing is meaningful for the story, and that my decisions have real consequences. In an open world, with the diversity of the ways and order in which you’ll explore these places, you’ll have a totally unique experience. I really want people to have these “wow” moments where they never thought of how it played out. I want them to see in Geralt his grey moments, when he’s most human. “It’s real, it’s touching me, it’s important to me.” For me, that’s the most important part for The Witcher 3: Wild Hunt.

Gilewski: For me, as a gamer, my time is really limited, because of family, work, and other interests. So when I’m playing a game, I don’t want to do things that are meaningless. “Why the hell am I losing my time doing this?” When I play The Witcher 3, I don’t have this feeling. As we said before, even the tiny, minor quests are cool. I don’t have the impression that I’m wasting my time doing that. I get lost in this world and have fun.

Iwinski: Just to end with a digression towards something thats a little more mainstream but with a similar feeling, look at Game of Thrones. If you look at why it’s so incredibly popular, it’s because the theme is mature. It’s already something different, and it’s surprising people. The scene, the Red Wedding; people’s reaction to that was amazing.

We have stuff like that in The Witcher, and you get to control, you get to decide what’s going to happen. Within the game, it’s way more meaningful when you’re in charge.