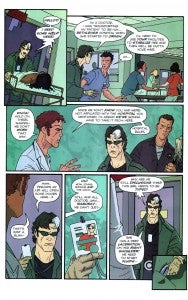 The fact that Hugh Jackman has now starred in not one but two solo films featuring as Wolverine has to really bother this guy. Luckily, he's a fictional character.

Below, check out a compilation video that some ingenious soul made of Dr. Perry Cox of Scrubs making a series of remarks about Jackman. It's worth it. At right, you can see Cox and other members of the Scrubs cast appearing in Todd Dezago and Craig Rousseau's The Perhapanauts.

So what's the deal with all the Jackman hate? A fan-run site dedicated to John C. McGinley, the actor who played Cox, explains:

Why would he not hate Hugh Jackman? From a character standpoint I can see where Cox would just be totally annoyed by Jackman for being a singing and dancing nancy boy masquerading as an action star that women drool over.

This is what John C. McGinley had to say on the matter from a 2006 interview with TV Squad: "I think it's because the creator of the show just can't stand how talented he is. Hugh Jackman is just too talented. For him to have won a Tony, he's Wolverine, and he's deadly good-looking. He's a great athlete, he can sing and he can dance. That's too much for Billy (Lawrence) to process."

The Wolverine Would Really Make This Guy Mad...