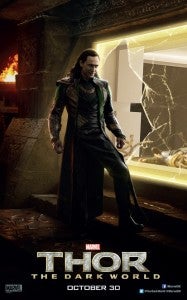 In a new interview with IGN, Thor: The Dark World's Tom Hiddleston shared some of his thoughts on Loki's motivations and on the footage from the film screened at San Diego Comic Con International in July.

Asked about whether some of what we saw might tie into Loki's trickster nature, Hiddleston told the site, "I couldn’t possibly tell you. But I would say be very careful with your suppositions. People are so quick to jump. That’s what I love about playing the character. People are so quick to draw conclusions about who he is. The whole thing about Loki is that he’s dancing on this liminal line between redemption and destruction. Just be very careful about drawing conclusions based on what you see."

The film, which opens in November, has raised a lot of questions about just how it will use Loki; the character, who was the principal villain in both Thor and Marvel's The Avengers, is back in the film and seemingly working both sides.

Check out a newly-released TV spot for the film below.