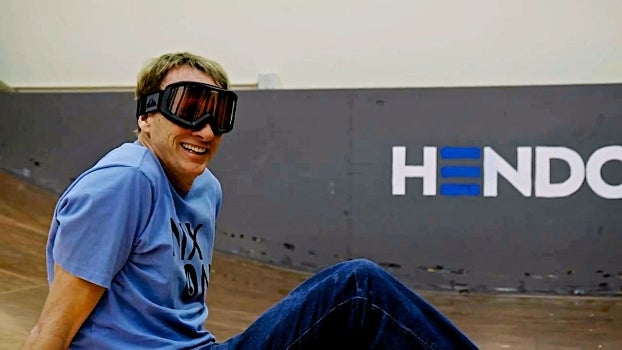 Skateboarding legend Tony Hawk is riding the first world's first real hoverboard and this time it's not a Funny or Die prank.

Hawk and Dave Carnie recently visited the HENDO Hoverboard warehouse to test out the hoverboard. While it only lifts one inch off the ground, that didn't stop Hawk from executing a 1080 and showing off some most epic maneuvers.

Hawk is still apologizing from the viral video he starred in from Funny or Die back in March.

Despite the over the top special effects and the cameo appearances from Christopher Lloyd, Moby, Terrell Owens and others, many believed the video to be true. As illustrated in the Hendo video, this time the hoverboard is real.

Hendo recently launched a kickstarter campaign to fund the project. Three days into the campaign, it has already met its $250,000 goal. In fact, with 27 days left, the campaign has already raised over $450,000.

"As you can see from the video above, the prototype is real and it works!" the kickstarter site reported. "But to see it hover in person, and better yet, to defy gravity by riding it, is something you need to experience as well."