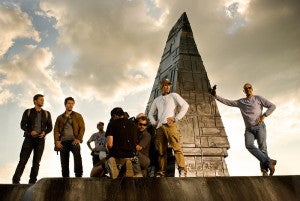 Paramount Pictures have released a new still photo from the set of Transformers 4, featuring Mark Wahlberg hanging out on some Cybertronian technology with the crew of the film.

Meanwhile, long-simmering rumors that the Dinobots will appear in the film might come to a boil today, if ComingSoon.net is right; they say a scene will be shot involving the fan-favorite Autobots later today.