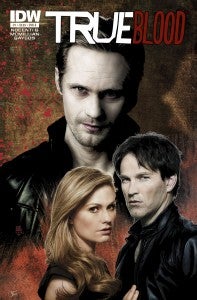 Former Marvel editor Ann Nocenti is busier in mainstream comics than she has been in a long while; just a couple of months after her debut issue of Green Arrow hits the stands later today, she'll take over the writing chores of IDW's recently-announced True Blood ongoing series, along with Alan Ball, who created the TV series the comic is based on. The pair will be co-writing the series along with Michael McMillian, an actor on the television series who co-wrote the Tainted Love comic book miniseries with veteran comics writer Marc Andreyko. Art will be provided by Michael Gaydos, who worked with Andreyko on DC Comics' Manhunter and with Brian Michael Bendis on Alias, which is currently being developed for ABC Television under the title AKA Jessica Jones. Covers will be provided by superstar cover and poster artist Tim Bradstreet. "As a fan from the jump, I was thrilled to come onboard to contribute to the lovely nastiness that is True Blood," said Nocenti in a press release from IDW. "Working on the comic with Michael has been a revelation, he generates amazing stories and packs them with must-read tidbits and I'm lucky to be along on this ride." Ball recently announced that he would be stepping down as the showrunner for the popular HBO series after the current season concludes, clearing time on his schedule to develop new material for the network, so if he remains on the comic book it will be his only current connection to the franchise he helped build from the popular horror-drama series of novels by Charlaine Harris, who will appear at next month's Chicago Comics and Entertainment Expo. The first arc of the ongoing series will explore territory that the TV show and novels haven't yet--by looking at the characters' reactions to the "Great Revelation," when vampires revealed to the world that they existed and set the stage for everything that would come later in the series. While the comic books are based in the world of the HBO show, True Blood operates on similar logic to The Walking Dead--each medium that tackles the character does so in its own way and appears to have its own continuity that doesn't necessarily bear on any other media. The series will launch in May and can be ordered in the March edition of Previews Magazine. True Blood: The French Quarter, IDW's last miniseries, will be released in hardcover later this month.