During a Skype chat yesterday with the Tel Aviv Cinemateque, Twin Peaks co-creator David Lynch was pressed repeatedly about rumors of new material being shot for a Blu-ray release, and/or a revival of the series.

The filmmaker, rather surprisingly given how loathe he seems to be to address these never-ending rumors, was fairly straightforward on both counts, as you can see in videos below courtesy Welcome to Twin Peaks.

"Rumors are just that: Rumors are rumors," Lynch said on the possibility of the series returning (one his daughter has denied on his behalf while his co-creator Mark Frost has kept hope alive for fans). "There’s always been rumors about things and there’s no real truth to it. I don’t where these rumors come from, but I think they were based on some misunderstandings of what’s going on." 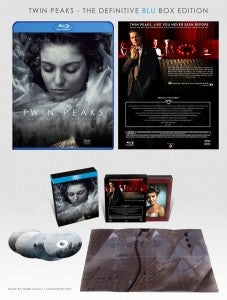 And while he stayed away from confirming the reported new footage shot with Ray Wise and possibly other returning actors earlier this month, Lynch did confirm the long-rumored Blu-ray box set...even if it doesn't seem to be as extensive as previously reported.

"It’s true that there will be a new Blu-ray of Twin Peaks, of the pilot, the first season, the second season," Lynch said, notably leaving the prequel film Twin Peaks: Fire Walk With Me and its reported treasure trove of deleted and extended scenes off the roll call. "And there will be some special things on that Blu-ray that haven’t been seen before. That’s about all I can say."

Earlier this month, rumors cropped up that he was shooting some kind of new promo set in Twin Peaks for the Blu-ray release, when a casting notice for a beautiful and busty waitress popped up online. The notice came down quickly, and Frost denied the rumors, but Wise later confirmed that some material had been shot.

You can see embedded Instagram videos of Lynch's Skype appearance below.