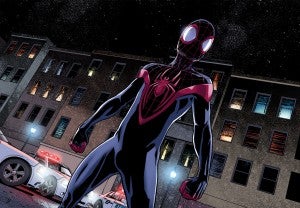 The mural has become an annual tradition for Marvel, celebrating the kick-off of their activities at Comic-Con International, and already features art by John Romita Sr., John Romita Jr., Leinil F. Yu and Humberto Ramos, among others. Marquez will add Morales to the mural at 4 p.m. PST tomorrow, and the restaurant--is located on 615 J Street in the heart of San Diego’s entertainment district--will be open for the public to stop in, have a bite and check it out.

Morales has been one of Marvel's most successful new characters in years, having generated a lot of attention and controversy when he was created following the death of Peter Parker in the Ultimate Comics Universe. A half-Black, half-Hispanic character, Morales is intended to reflect an evolving approach to the Ultimate Marvel Universe that's also reflected in the recent decision to make replace Nick Fury with his African-American son, a move that brings the 616 Universe more in line not only with its Ultimate counterpart but with the mega-hit Avengers feature film.

Ultimate Spider-Man to Join Marvel Comics Mural at the Palm