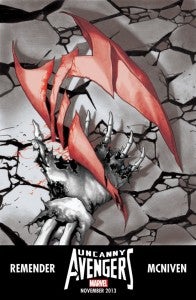 Spoilers ahead for today's issue of Uncanny Avengers.

In a move that will shake up the team dynamic in Marvel NOW!'s flagship title significantly, two members of the Uncanny Avengers will die in today's issue.

This wasn't entirely unforeseen; the image at right began circulating at San Diego Comic Con International this summer, where series writer Rick Remender told the audience at the Infinity panel in no uncertain terms that there would be a  number of casualties among the team's lineup by year's end.

“In the story right now, we’ve seen a lot of in-fighting among the superhero community in the Marvel Universe going back to Civil War when that fuse was lit and leading up to AvX," Remender said. "The mutants and the humans–the Avengers and the X-Men–have found it very difficult to work together, cohabitate and find commonality to get over their differences and work together as heroes. The consequences of that are what Uncanny Avengers is all about so as we build the story you’re going to see more and more of the consequences of these heroes’ inabilities to work together as a unit–and it’s going to be large in scope, the things that are happening to them.” 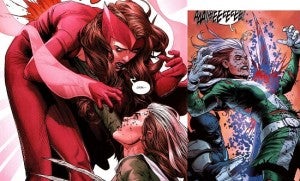 As one might expect from the gloved hand and the headpiece at right, it's Scarlet Witch and Rogue who are taken out during the fight--in rather bloody and spectacular fashion--although at least Rogue has a very clear "escape plan," in that her power to absorb the powers of others through physical contact suggest she may have been in possession of Wolverine's healing factor when she died--she was certainly in possession of his claws. Wanda, meanwhile? Well, she's just recently come back from a long publishing absence. Killing her now would be a strange move, and her reality-warping powers certainly seem ill-suited to being killed by a sharp object. But we'll see.

“What’s happening…is going to be a culmination of all that we have seen in the Marvel Universe leading up to this point with the Avengers and the X-Men," Remender said at Comic Con. "And while the heroes have been dealing with their own issues and their inability to work together, the villains have been planning things and this is going to be a big story that revolves around the Red Skull, the Apocalypse Twins and Kang–it’s going to have a wide scope going through time and space and there’s going to be a large body count. The heroes are going to start paying for what they’ve done in losses of life.”

Will there be more to come? He certainly suggested as much--or at least he says the lost characters won't be replaced right away.

“The cast will be getting much smaller very soon. Things are not going well for the team and these are the consequences when heroes do not act heroically. things are breaking down. When we get to issue 22, we’ll see a shift up and we’ll see some new characters coming in but not until then.”

Of course, both of the characters killed will soon be appearing in a major motion picture. Scarlet Witch, a character Marvel literally just this week confirmed will be portrayed by Elizabeth Olsen--will appear in Avengers: Age of Ultron while Rogue will appear, at least briefly, in X-Men: Days of Future Past, along with roughly 35% of all other characters in the history of fiction.

It's conventional wisdom that when you kill a character who has a movie coming, the death won't last long. Captain America, for instance, was killed when The First Avenger was in development and then, as many predicted, brought back just months before the release of the movie. A number of fans have predicted the same outcome for Peter Parker with The Amazing Spider-Man 2 due out in a few months. Publishers tend to want to capitalize on the popularity of these characters and often give the stars of the movies their own miniseries or even an ongoing title to see whether they can segue that mainstream awareness into sales success.

Will it be different this time? It could be; both Avengers: Age of Ultron and X-Men: Days of Future Past are stories that have already taken place in the comics. In other words, Marvel may be banking on selling more hardcovers and trade paperbacks than serialized monthly comics out of those films. Days of Future Past will be one of the first films to use an actual story title from the comics as a selling point (not the first, mind you; X-Men: First Class already did it, for starters), and Marvel will follow suit with Captain America: The Winter Soldier and Avengers: Age of Ultron over the next couple of years. Could the perception that it's a "book" instead of a series of magazines being adapted for these movies change the way Marvel hopes to capitalize on the film? And if so, could the deaths of characters slated to appear on the big screen have a little more chance of remaining intact for a time? We'll see...but it doesn't seem all that likely.