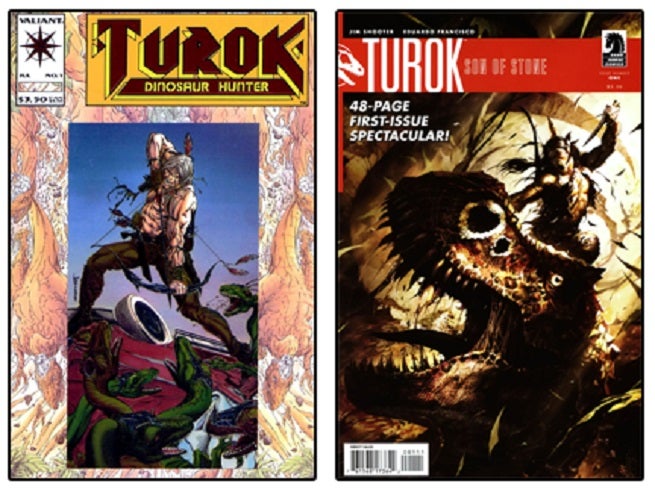 With Dynamite's recent run of comics featuring Gold Key Comics winding itself down this month, here's something coming out of the Valiant Entertainment creative summit that's as baffling as it is potentially exciting.

Turok, Dinosaur Hunter from writer Greg Pak at Dynamite Comics may have ended in February, but the character is currently featured, with creator Jeff Lemire and Valiant editor Warren Simons tagged, in a tweet from Valiant CEO and Chief Creative Officer Dinesh Shamdasani:

Turok was, of course, a major player in the Valiant Comics universe of the 1990s, as were the rest of the Gold Key characters including Magnus, Robot Fighter, a character whose just-ended series was written by Valiant Summit attendee Fred Van Lente.

What's interesting is that there was, earlier this weekend, a list of story ideas that was tweeted by the official Valiant account, including the cryptic word "Homecoming" -- an easy enough guess to associate with any attempts to bring back the Gold Key characters.

For his part, Lemire didn't seem too keen to deny it when fans started to get excited on Twitter. While he stopped well short of confirming that he was working on anything, his comment could certainly be construed as stoking the flames...

Lemire is currently working on The Valiant for the publisher, and also writing the forthcoming Bloodshot Reborn, coming from the publisher in April following the events of that series. He's also one of four writers DC Comics' weekly The New 52: Futures End, although he hasn't got any DC work lined up post-Convergence so it appears he's done there in March for the time being.

This is far from a confirmation, of course -- and even if "Homecoming" were to be a reference to the Gold Key characters you'll notice that it's one of the only items on the list featuring a question mark after it -- but it's a hint that Valiant's extremely vocal fan base have been waiting for.