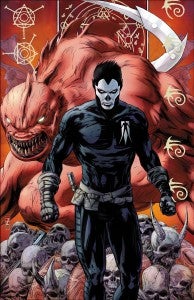 Following a teaser that ran earlier in the week, Valiant Entertainment has announced that Shadowman will indeed get his own ongoing series, beginning with a November #1 by the creative team of  Patrick Zircher (Captain America, Thor: Ages of Thunder) and Harvey Award-nominee Justin Jordan (The Strange Talent of Luther Strode, Team 7). Set in New Orleans, the series will deal with a war between Shadowman and an army of monsters, according to the statement made available from Valiant:

"Jack Boniface must embrace the legacy he was born to uphold. As Shadowman, Jack is about to become the only thing that stands between his city and an army of unspeakable monstrosities from beyond the night. But is the mantle of Shadowman a blessing or a curse? And what is the true cost of his otherworldly power?"

The series will launch with variant covers on the first issue by famed artists Dave Johnson and Bill Siekniewicz. A pullbox-incentive "blackout" variant cover will ship to fans who subscribe to the issue at their local store before the final order cutoff date. "Shadowman is one of the most popular characters in the Valiant Universe and the fans have been asking me since day one when he's going to return," said Valiant Executive Editor Warren Simons in a press release. "Justin and Patrick have put together an action-packed debut that also adds an incredibly important new dimension to the Valiant Universe. And as Patrick's pages clearly demonstrate, he's one of the finest artists working in the medium today. We've got an amazing team at the helm of our fifth ongoing launch and I can't wait for the first issue to hit the stands." Check out the cover and five preview pages below. [gallery link="file" order="DESC" orderby="title"]