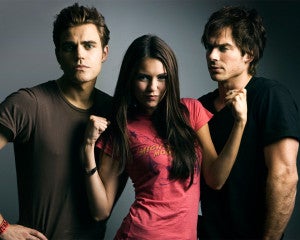 , Gossip Girl and Pretty Little Liars are the first three intellectual properties for which Amazon has acquired the rights to officially publish fan fiction, with royalty payments being split between the rights holder and the author.

Earlier today, Amazon Publishing announced Kindle Worlds, the first commercial publishing platform that will enable any writer to create fan fiction based on a range of original stories and characters and earn royalties for doing so. Amazon Publishing has secured licenses from Warner Bros. Television Group’s Alloy Entertainment division for its New York Times best-selling book series Gossip Girl, by Cecily von Ziegesar; Pretty Little Liars, by Sara Shepard; and Vampire Diaries, by L.J. Smith; and plans to announce more licenses soon. Through these licenses, Kindle Worlds will allow any writer to publish authorized stories inspired by these popular Worlds and make them available for readers to purchase in the Kindle Store.

“Our books have generated a massive amount of fan fiction, and we see this as an evolution in publishing and a valuable way of broadening our brands and engaging fans,” said Leslie Morgenstein, President Alloy Entertainment. “When working with Amazon Publishing on this scale, we know we’re in good hands and everyone will benefit.”

“At Kindle, we’re not only inventing on the hardware and software side of the business, we’re inventing new ways to create books,” said Philip Patrick, Director, Business Development and Publisher of Kindle Worlds. “Our goal with Kindle Worlds is to create a home for authors to build on the Worlds we license, and give readers more stories from the Worlds they enjoy. We look forward to announcing additional World licensing deals in the coming weeks.”

Given the relationship with Warner Bros. Television, one has to wonder whether comics-friendly properties like Smallville and Arrow are on the table, as well, although it's unlikely, particularly since the original rights-holder is actively publishing digital comics based on both of those properties.

Vampire Diaries Fan Fiction Can Now Be Published Through Amazon

Everything Coming to Peacock in August 2021

Superman: Son of Kal-El #1: Everything a Superman Story Ought To Be