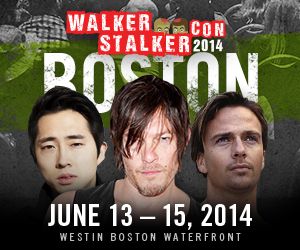 The Walker Stalker Con, a family of popular conventions celebrating AMC's The Walking Dead, will return to Boston next year, organizers announced yesterday.

Walker Stalker Con Boston 2015 will take place over Saturday August 22nd &
Sunday August 23rd, 2015 and the event will be returning to the Westin Waterfront.

ComicBook.com will have more information for you over the upcoming weeks & months, as they become available. Tickets will go on sale July 1.

This year, the event hosted numerous horror movie and The Walking Dead-themed celebrities, although the current cast members were unable to talk about the upcoming season, since nothing has yet been revealed. An August date in 2015 may mean a more exciting show in terms of panels and spoilers, since Comic Con International happens in July and lots of information (including some footage) typically comes out there, opening up the cast to talk to reporters and fans.