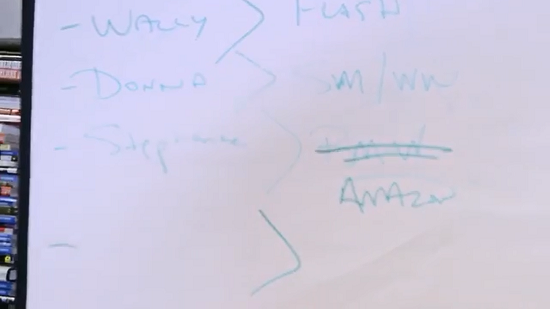 In the latest episode of DC Comics's All Access web series, a quick peek at the white board in a DC editorial office seems to suggest that Dan DiDio and Jim Lee have plans in the near future for Wally West, Donna Troy and Stephanie Brown.

But...Stephanie Brown as an Amazon? Or in Amazon, the stalled-in-development Wonder Woman TV series? Hmm...!

Besides that, Wally West is listed alongside The Flash, and Donna Troy is paired with Superman/Wonder Woman. It's easy to think this might be a TV list, but since it's on the wall in the Lee/DiDio conference, it seems more likely to be comics--and after all, there's no Superman/Wonder Woman movie in development, as far as we know...!

And who's that blank space for? Cassandra Cain?

You can check out the video below. The image above appears at 4:21.

Wally West and Donna Troy Headed to the New 52?