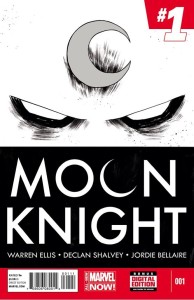 Warren Ellis, best-selling co-creator of Transmetropolitan, will team with former Thunderbolts artist Declan Shalvey and Jordie Bellaire for a relaunch of Marvel's Moon Knight, kicking off in March. "The man is demented in more interesting ways than I think Batman ever was," Ellis told Hero Complex. "[His] cape is actually a crescent moon and he goes out only at night and dresses in reflective white so you can see him coming. Now that's nuts…. I like that." The character's history has been kind of all over the map, with critically-acclaimed runs mixed with low-selling and forgettable stories; mystical stories mixed with simple Batman knockoffs. Ellis says that his version "unifies all the previous takes, making the character whole and taking him forward into a new kind of crime fiction." 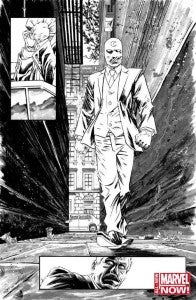 Besides his novel Gun Machine, currently in development for television, Ellis has a history in grabbing Hollywod's interest in the comics, too: Red, his creator-owned series with Cully Hamner, inspired the Bruce Willis film by the same name, and elements from his Iron Man run, in which he introduced the Extremis virus, have been rolled into Iron Man 3 and Marvel's Agents of S.H.I.E.L.D. Not only would it be unsurprising if a Moon Knight Netflix series based on Ellis's work was announced for a second "phase" of Defenders projects, it would almost be surprising at this stage if that didn't happen. The character was created by Doug Moench and Don Perlin, but got his own ongoing series for the first time by Moench and famed artist Bill Sienkiewicz. It's that run that will inspire Ellis's take on the character, the writer told the LA Times.