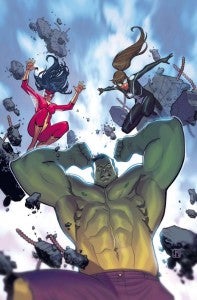 Warren Ellis will join regular series writer Kelly Sue DeConnick for four issues of Avengers Assemble--#22-25--which will tie into Matt Fraction's Inhumanity beginning in December, according to Marvel's solicitations revealed early at Newsarama. DeConnick will write issue #21, which leads into the arc, before Ellis will joins her as co-writer for the rest of the story. Once the arc is finished, there may be a creative change in the offing for the book, which DeConnick took over with #9 after the departure of Brian Michael Bendis. Newsarama claim that Marvel will have an announcement regarding the title's future soon. The series, which was designed as a jumping-on point for fans of the movie, with a team composition that mirrored what you see on the big screen, has been well-reviewed under DeConnick but recently has felt a bit directionless as Marvel has roped it into more and more big crossover stories, with Age of Ultron and Infinity tie-ins that have made the book feel less special and stand-alone and more like just another Avengers title. You can check out the solicitation text for the first issue of Ellis's arc below and the cover above and at right. Presently, DeConnick is writing Captain Marvel and developing some creator-owned properties while Ellis works on his novels and will soon publish Avengers: Endless Wartime with artist Mike McKone. AVENGERS ASSEMBLE 22.INH Empowered by INHUMANITY, will Toxic Doxie finally destroy the Avengers? Written by KELLY SUE DECONNICK & WARREN ELLIS Art by MATTEO BUFFAGNI Cover by JORGE MOLINA