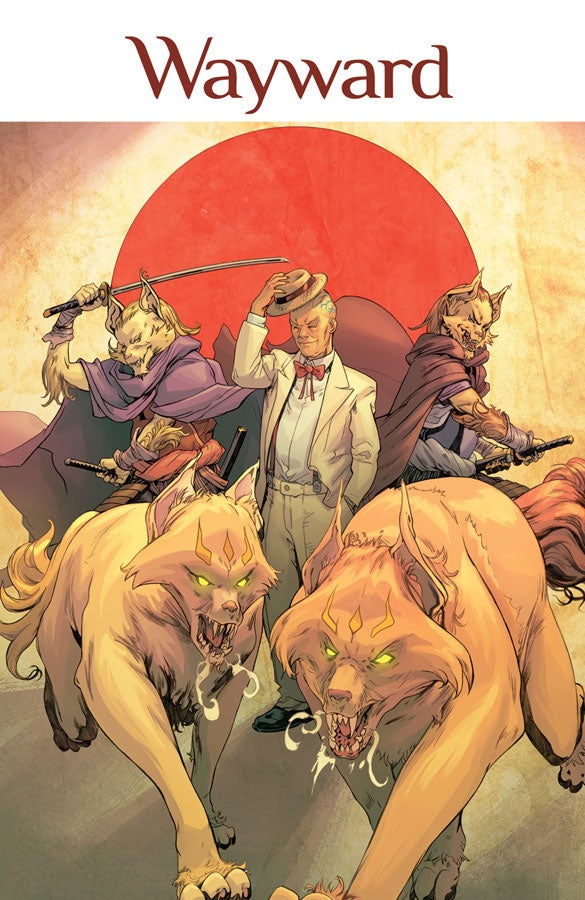 Wayward #5 is the climax of everything found in the first four issues of the series. Mysteries are solved, opposing characters collide, and not everyone makes it out alive. It is a big action-packed issue that is already reshaping the series after only five issues. Jim Zub and Steve Cummings are not holding anything back here expanding the series into a large-scale, magical epic that feels like a natural progression, even if the added chaos confuses the story at times.

That confusion creeps in early in the issue. Cummings did an excellent job of introducing powers and abilities in the series first several issues. When Rori first discovers she is special, the red strands of light and her subsequent actions revealed what she was capable of doing. Everything she and her friends could do was shown to readers, allowing us to understand the rules of this urban fantasy. At the start of Wayward #5, Rori begins to do a lot of things very quickly. There is never even a moment of recognition that what she is doing is new or different. Instead, she goes from having a very specific skillset to being a generic superhero with a wide array of powers. It is a change that begs a lot of questions about both the story logic and the lack of response.

This shift allows Zub to quickly move Rori to the location of this issue's climatic sequence. A lot is being fit into these pages and everything needed for a big showdown is rushed into place. That pacing doesn't do the comic any favors. The stakes of this climax are incredibly high, almost every significant character in the series is present and they are all at risk. It starts and stops so quickly that those stakes never seem to be recognized. There is still impact when things go wrong, but it only seems half as effective as it ought to be.

When characters die, it still holds significance. Zub and Cummings don't hold back here and the action and consequences hit hard and fast. They execute the sequence in such a way that there's no easy solutions or opportunity to resume the status quo. Whatever happens next in Wayward, the series will be forever altered by the events of this issue.

When I reviewed the first issue of Wayward in August, I took notice of the clear visual storytelling and detailed landscapes. Those elements are still present here, but they have been almost overwhelmed by the action and chaos of the issue. The distance between two distinct locations is never established and the chain of cause-and-effect during an action sequence is not always clear. Cummings' work is at its best when given room to breathe, but here it is forced to move at a much quicker pace.

Cummings' backgrounds are still excellent. Even when the action is set in a crumbled tunnel or house, he works to distinguish the place as being unique. Furniture and crumbling walls are given a consistency that helps to coherently convey geography in action sequences. Tamra Bonvillain's colors are as important as ever. She establishes the increasingly dark mood of this issue in its overcast skies and billowing smoke. At no point is outside light allowed to shine in, but the art and its lighting still appear natural. The glowing red strands and Kanji that define Rori's powers stand out against that night, helping to provide some explanation for her new powers as quickly as they appear.

Wayward #5 is the most significant issue to date, but it lacks the excellent execution of earlier installments. So much is happening that individual moments are not given necessary space to breath and many changes are taken for granted. Its still an exciting thrill ride that increases the scope and drama of Wayward, but it stumbles in doing so.