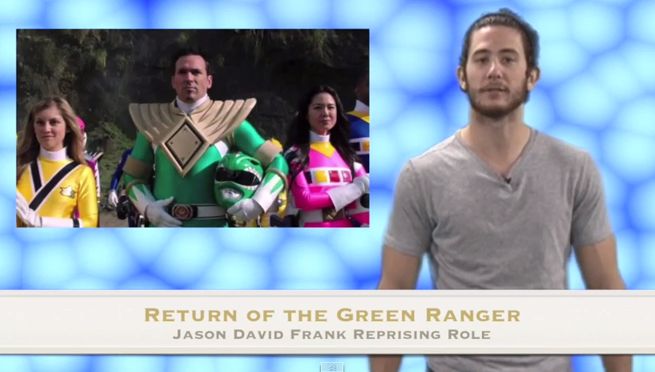 Comicbook.com’s weekly round-up brings fans a collection of the biggest stories of the week in comic books, movies, television, and video games. For the week of November 21, host Brandon Davis covers Power Rangers, Fast & Furious, The Walking Dead, and more.

A handful a power rangers characters and actors are returning this weekend! Most importantly, though, through a clip provided to IGN we saw that Jason David Frank will be reprising his role as the Green Ranger on Nickelodeon this Saturday after having been absent for years. Based on our comment section, it seems like there are some mixed emotions about this, but generally people are pretty excited

It doesn’t look like the Fast & Furious franchise will be slowing down any time soon, despite some fans insisting it can’t go on without Paul Walker. When asked if the franchise had a future without the late star, Universal Studios head Donna Langley responded, “I believe it does. We think there’s at least three more. Paul is, and always will be, an integral part of the story, but there are many other great characters, and it’s also an opportunity to introduce new characters.”

The Walking Dead creator and writer Robert Kirkman said that the midseason finale of The Walking Dead will be a bloodbath, in an interview with The Hollywood Reporter. Kirkman says that he is going to continue to evolve the human-to-human conflict and we will see some unexpected events in the episode. In his words, “On a scale of one to 10, it’s pretty deadly.” Makes you wonder if this is only about the group heading to the hospital in hopes of rescuing Carol and Beth, or if Abraham’s group is in danger, as well.

Last week, Marvel’s surprise hit Guardians of the Galaxy took home the Hollywood Blockbuster Award at the Hollywood Film Awards. Chris Pratt and James Gunn accepted the award. Guardians received the award, according to Black Panther himself, Chadwick Boseman, who presented the award, because it contained the three elemnts that makes people excited to go to the movies- great story, great special effects, and a great cast. What really stands out, though, is James Gunn’s acceptance speech, which I’m not going to try to do justice, I’ll just roll it for you.

Speaking of Guardians, you know who almost played Star-Lord? James Gunn told us this week that if it wasn’t Chris Pratt, it most likely would’ve been Glenn Howerton. I personally can’t help but think it wouldn’t have been the same.

IS THE DOCTOR MR. HYDE?

Spoilers ahead if you’re behind on Agents of Shield! You’ve been warned. So season 1 left us with a major question, who is skye’s father? Season 2 answered that for us-the Doctor. But who really is the Doctor? Well, we have a theory and suspect his real identity is Mr. Hyde. First of all, name and origin sends us straight to the little known Marvel villain who’s literary alter ego is Dr. Jekyll, but more likely is a reference to the character’ surgical skills, which were showcased earlier this season when he augmented normal humans. This hints at a past in the medical field, just as Mr. Hyde’s alter ego, Calvin Zabo, was a medical researcher before becoming the monster he is now. The Doctor also shows Mr. Hyde-like fits of rage, so perhaps he tried to augment himself using the Obelisk. Perhaps The Doctor even experimented on his own daughter, which explains why Skye did not have a violent reaction to the GH 325 that Garrett and Coulson did. It’s also worth nothing that Mr. Hyde has a daughter in the comics. Doesn’t hurt that Kyle MacLachlan, the Doctor himself, says we’re getting warm. What do you think The Doctor’s real identity is?