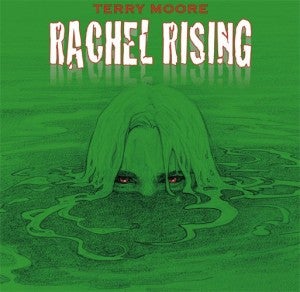 #1 hit comic stores around the country last week after its Comic-Con International debut in San Diego last month. Its creator, cartoonist Terry Moore, is best known as the creator of the indie smash Strangers in Paradise and its follow-up, Echo, which just wrapped and is available for sale in a “complete edition” of all thirty issues in both hardcover and softcover at strangersinparadise.com.

Yesterday on his Facebook page, Moore posted the following:

"Hearing from fans who had to go to several shops to find a copy of [Rachel Rising]. That means #1 was under-ordered, and now I just heard the retailer orders for #2 are even less! This means fans will have a much harder time finding Rachel Rising #2.

"Please let your retailer know you want #2 and 3 and more. Encourage them to bump their orders up, not down on this title, because this is not a book that will sit quietly on the indy shelf. I won't let it. Retailers need books like Rachel because they bring the rest of the world into the shop. Marvel & DC fans need books like Rachel because living off of only two food items gets boring real fast. Help me get Rachel off this %^#$*! order syndrome before it even gets started.”

It's a complaint common to independent titles and even some of the smaller “mainstream” comics (Ron Marz recently discussed similar ordering issues with his creator-owned and Image-published Shinku on Twitter), and something that exasperates not only the readers who can't find titles they want but the retailers who lose money when they have no stock to sell.

Months ago, he suggested that a digital comics announcement might not be far off for him, and ComicBook.com caught up with him this week to touch base on the issue, and to ask whether he thought digital could be the road to salvation for independent creators who have a hard time building and retaining an audience in the direct market.

ComicBook.com: You had said quite some time ago that you would have an announcement “soon” regarding digital delivery. Given your troubles with ordering through the direct-market (and the recent release of the first issue of Rachel Rising), have you considered that as an alternative delivery route to your fans?

Terry Moore: Not just me, but everybody in comics is watching the digital front move in like a storm. But it’s not hitting like we thought. It’s taking longer. There are no digital book success stories yet, most of the people on planes are not reading an ebook, nobody’s rich yet… in fact, nobody’s replaced their print income yet. When digital can replace your print income, then the storm will hit. My “announcement” was about the delivery systems being developed. But they’re taking longer than promised and I’ve since become convinced that we should all stop focusing on the delivery mechanisms and focus on the business models. I don’t care what gadget is in Vogue this month, where’s the frikkin' business model that will pay off my super-yacht mortgage? When does digital stop being the free-love commune of the geek set? We have houses and employees to support. Show me the frikkin' money. Well, I don’t have any employees, but I’m sure somebody in comics has one… somewhere, doing something useful. And they need a salary. Man does not live on iCrap alone.

ComicBook.com: Jeff Smith has gone that route now, signing on with Comixology for Rasl. Do you think if other independent creators like yourself join him, it will hurt the direct market in the long term to have less of a presence of non-”big two” material?

Terry Moore: First off, you should note that Jeff has never made a wrong move, so his link to Comixology is something to respect. I don’t believe my own movements have any significant effect on the machinations of the direct market. Not at my modest indy numbers. When I become of note is if I figure out a way to achieve success beyond the direct market through what digital offers. If I can rise above the indy glass ceiling I have in the printed-comics biz—these low order numbers I can’t get past—then anybody can follow me through the hole I make. That would be a dream come true for every author in the world who doesn’t work for Marvel or DC. I can’t tell you how deeply passionate we creators are about finding this path, and when you get a lot of humans yearning for something, things happen. It’s just a matter of time.

But it’s also important to say that I would not leave the direct market. I would never turn my back on the system that supported me all these years. Whatever the new rules become, they have to include the retailer family I come from. As long as there is a direct market… and there is no real sign of it ever going away, folks, just a lot of brash tech talk… then my books will be a part of it.

Do you have any idea how long I’ve been listening to digital prophecies of doom? Since the early eighties, when I was a TV editor. The Sony and 3M tape salesmen would visit the facility and tell us our business was doomed if we didn’t order all their beta test systems as they came out. If we’d done that, we would have had a massive junk heap of outdated digital attempts and transition gear as the industry flung every digital idea they had out to the market in the 80's and 90's. A lot of post-production facilities went out of business trying to pay for that machinery that was outdated every 6 months but took 2-3 years to pay off.

Twenty years later, the same syndrome finally hits the book biz and for most people this is the first time they’ve seen the syndrome. They freak out and think the world will be upside down the day after tomorrow. Well, there are still post facilities, and they now use standardized digital formats. And we still have comic shops and Diamond, and we will all soon be adding a standardized digital format to our arsenal. It’s never either-or in the beginning, it’s always plus. By the time something is outdated, you're glad to see it go. I don't see anybody burning books or their Diamond order form.

So I would expect that whatever I finally get to do in digital, it will be plus what I do now, plus direct market. It would be nice if digital saved the direct market. Why don’t we talk like that? Why isn’t that an option? What if the answer—the new digital business model— comes from a clever retailer? I swear to God, I would cry with relief if that happened. Them’s my peeps, we’re in this together. (smile) You know, the direct market is a small world, most of the active players know each other. It would be nice if we all rose together into something bigger, like all those key computer kids who knew each other in college and went on to launch the computer movement with their own major companies. I like that forecast better than everybody's on their own—best of luck to you.

Batwoman: "Within the Limitations" Preview Released

Skittles Brings Pride Packs Back For a Second Year

Batwoman Recap: Everything You Missed in "I'll Give You a Clue"

What Does Morgan’s Key Unlock on Fear the Walking Dead?