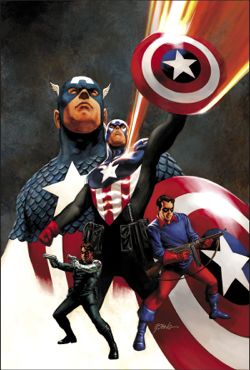 There are some superheroes that you just don't kill. While killing off and replacing Green Lantern or the Flash might be an acceptable way to breathe new life into the characters, there are certain superheroes like Superman and Captain America that should be forever off-limits. Two years ago, Marvel put a bullet in Captain America. Sure, DC Comics once killed off Superman, but there was never any real doubt that the Man of Steel would return. It's been two years, and Captain America is still dead. Ok, so Steve Rogers' old sidekick Bucky Barnes is prancing around in the Captain Americacostume, so one could argue that Captain America lives on. However, Steve Rogers, the one true Captain America, is still dead. Saying that someone besides Steve Rogers could ever really be Captain America is like saying someone besides Clark Kent could be Superman, someone besides Bruce Wayne could be Batman, or someone besides Peter Parker could be Spider-Man. Granted that DC Comics is publishing a storyline where Bruce Wayne is being replaced as Batman, but it isn't the same thing. DC Comics hasn't made any secret of the fact that Bruce Wayne will eventually be back. Everyone knows it won't be permanent. However, with Captain America, it's really starting to look like Marvel Comics really did kill off Steve Rogers forever. Killing Captain America is like ripping up the Constitution, is like burning the flag, and is like knocking down the Statue of Liberty. Captain America is an icon to America, who has risen above the status of just being a comic book superhero. We are at a time of great change in America. Unemployment is higher than it's been in decades, the economy is in the biggest shambles since the great depression, and the threat of terrorism keeps rearing its ugly head. Despite all these problems, there is also a sense of great hope in America. There is the hope of a new President, a sense of Patriotism, and a belief that whatever the challenges might be, America will always overcome. On this Memorial Day, when America honors the men and women, who have given their lives to preserve freedom, I can't help but think about how the real Captain America is still dead. The Sentinel of Liberty just can't be gone. With the fiftieth issue of Captain America hitting comic book stores recently, and Bucky Barnes still slinging the shield, Steve Rogers return seems more and more unlikely. However, next month will bring the milestone 600th issue of Captain America. (Marvel is renumbering the series to take into account the original series is the reason for the jump, but don't ask me to do the math to explain it.) A teaser for Captain America #600 promises the most wicked plot twist since issue #25, which of course was the issue where Steve Rogers died. Could Marvel finally be planning to bring Rogers back? Please, let it be so. Killing Captain America was just plain wrong. It's time to bring him back. America needs the real Captain America back.