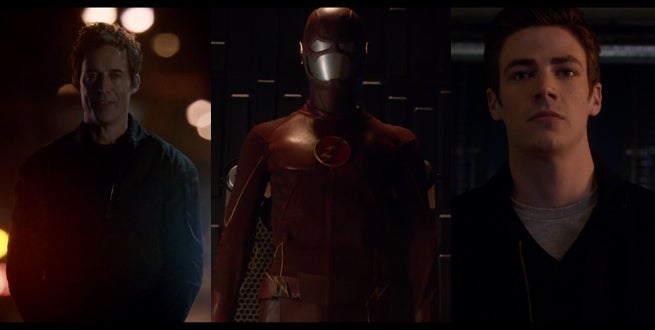 Welcome to the first edition of “Why It's the Best.” Let’s be clear, I am arguing definitively why The Flash is the best comic book show on TV. In future columns, I will argue definitively why another is. Think of this as debate class, and today I’m pro-Flash.

Of course, that’s easy, because The Flash is the best comic book show on television right now.

The Flash airs on The CW on Tuesday nights. Based on characters and select stories from DC Comics, the series centers on forensic scientist Barry Allen. When struck by lightning charged by an exploding particle accelerator, Barry gains the ability of super speed and becomes The Flash, the fastest man alive. Inspired by his friend Oliver Queen/The Arrow, and in partnership with his new friends at S.T.A.R. Labs, Barry immediately takes to superheroics. Jumping into the fray to stop the crooked metahumans created by the particle accelerator's explosion, The Flash speeds to victory with help from Caitlin Snow, Cisco Ramon, and (for now) Harrison Wells. He also teams up with police officers Joe West and Eddie Thawne, and pines after the love of his life, Joe’s daughter Iris.

The biggest thing pushing the The Flash past its competitors is its main conceit: an average kid who gets powers and excitedly, readily, jumps into the superhero biz. Oliver Queen is literally tortured into his position. The Agents of S.H.I.E.L.D. have a sense of duty. Barry Allen just wants to be a hero.

Why It’s The Best

No show better represents the super hero fantasy than The Flash. Not since rival Marvel Studios’ Iron Man, when Tony Stark said, “Yeah, I can fly” and declared definitively, “I am Iron Man,” has a hero shown us how to be super in such a swashbuckling way.

Barry Allen, not just The Flash, is a superhero. Sure, we’ve seen that when he temporarily lost his powers in the old superhero trope, but it’s clear in the way he approaches his entire operation. If he had never met Cisco, Caitlin, and Harrison, Barry Allen gives the impression that he would still run into action (he just wouldn’t seem quite as cool or smooth while doing it). The inherent sense of heroism was already there, and the lightning just pushed it ever further toward the surface.

I mentioned a superhero trope, and that’s another thing The Flash pulls off to great effect. While many comic book shows, especially the superhero variety, try to dance around the source material, The Flash embraces it. That’s not to say every story is lifted directly from the printed page, or that characters and directions haven’t been changed – of course they have. It just means that this show recognizes, more than any other, that the character (in his many incarnations) has thrived for 75 years at DC Comics for many great reasons, and it’s not afraid to use those reasons to its advantage.

That manifests in the form of the aforementioned occasional superhero trope, like the loss of powers or hiding his secret identity from the object of his affection. Sometimes, the series shines through the sheer goofiness of its characters' names, shown here through the giddy excitement of Cisco (he’s not just a tech genius, he also names most of Flash’s foes). It even characterizes Barry’s very heart and soul. Flash’s enthusiasm, desire to do good,  eternal optimism, and ability to embody hope itself all come directly from the comic books. Together, these attributes make up the TV show's core.

Of course, we’d be remiss to give merely a passing mention to the supporting cast. The S.T.A.R. trio of Caitlin, Cisco, and Harrison are outstanding for technical jargon, moral support, and the occasional deus ex machina. The crew's relentless assistance has quickly grown into something more closely resembling a family unit. Of course, that should all change as Harrison’s secret life as time-traveling villain Eobard “Reverse-Flash” Thawne continues to leak out.

Luckily, that only strengthens the argument. The Flash doesn’t just have the best, most enthusiastic hero on screen, it has the best villains, too. The show has managed to introduce major Rogues like Captain Cold and Heatwave while also reaching relative unknowns like Rainbow Rider or digging into the archives for a pair of Tricksters. The Reverse-Flash, meanwhile, has lurked mostly in the background. With only a handful of  appearances teasing his larger mystery, every nugget continues to build to what should be a glorious payday. Oh, and we’re getting a hulking telepathic super-intelligent gorilla this season, too.

While all of The Flash's individual elements contribute to it being the best comic book show on TV, ultimately, it’s the sense of fun, of adventure, and of wish fulfillment that keep us watching every week and wishing we were the fastest man alive. That, and Grodd, the super intelligent telepathic gorilla. I mean, come on!

If you had to argue The Flash is the best comic book show on TV, what reasons would you give? Sound off in the comments!

Why The Flash is the Best Comic Book Show on TV