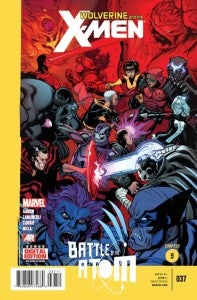 Wolverine and the X-Men

#37 - chapter 9 of “Battle of the Atom” - picks up right where the previous chapter left off. Cyclops and his crew of X-Men, along with the X-Men from the future, arrive at the Jean Grey school to face off with Xorn's band of X-Men – now revealed to be the future Brotherhood of Evil Mutants. Xorn uses her psychic powers to help her team escape, and the X-Men must give chase.

As the penultimate chapter of the crossover, this issue's foremost mission is to ramp up the excitement leading into next week's big finale. Writer Jason Aaron succeeds by knowing when to lay of the throttle and let the tension simmer a bit, splicing in bits of humor to keep the tone from getting too grim. The issue also has a handful of nods to iconic aspects of the X-Men mythos – fitting for a crossover celebrating the franchise's 50th anniversary – including a return to Cape Citadel, where it all really began.

There are some nice character moments as well, many of them coming from past and future X-Men getting to know each more as the battle continues. Quentin Quire has a pitch perfect meeting with his future self, we find out for sure that Kymera – the young girl with the panther – is Storm's daughter, Magik shows her admiration for her future older brother, and there are several scenes with three versions of the same X-Man all battling each other. Its a lot of fun, especially if you have a special fondness for these characters.

We also edge, slightly, towards revealing some of the mysteries behind “Battle of the Atom.” Future Quentin Quire reveals that there is a particular “something” preventing the past X-Men from returning to their time right now, and Jean Grey reveals that she saw something horrible in the future caused by one of the original X-Men. Its all rather vague, as pointed out by the characters themselves, and unlikely to be resolved or revealed fully in the one issue this crossover has left. It's unfortunate that we likely won't get that bit of closure for “Battle of the Atom,” but it likely hints at things to come in future X-Men storylines.

Giuseppe Camuncoli may not have been the best penciler for this issue. His simple style fits best during the conversation scenes, but lacks some punch when it comes to the big fight scenes and splash pages. They're not bad – readers will still want to stop and stare at the double-page splash where three teams of X-Men clash with the future Brotherhood at Cape Citadel – but its hard not to imagine how they may have looked if it had been drawn by an artist with a bit more flair, such as Stuart Immonen, who has such a particular talent for those double-page layouts.

This issue leaves the pacing problems of the previous chapter behind and will leave fans looking forward to the finale. “Battle of the Atom” has been a fun ride, and this issue gives reason to believe it will finish out strong.

Wolverine And The X-Men #37 Review