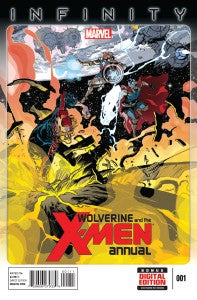 Wolverine and the X-Men Annual #1 wears the banner of an Infinity tie-in, but its relationship to Marvel's big, cosmic event is surface level at best. In actuality, the annual is a way for writer Jason Aaron and artist Nick Bradshaw to catch up with Kid Gladiator, a fan favorite character from the series' early issues who was forced by his father, Majestor Gladiator of the Shi'ar empire, to leave the Jean Grey school during the events of Avengers vs. X-Men.

Since leaving Earth, Kid Gladiator has been enrolled in the Imperial Guard Training Academy on the Shi'ar throne world of Chandilar. His experience at this academy contrasts sharply with his experience at the Jean Grey School for Higher Learning. At the Imperial Academy, conformity, regularity, and obedience are all valued highly by his teachers. On top of that, its never attacked. Compared to the Jean Grey Academy, where differences were celebrated and battles with supervillains, Avengers and other X-Men occurred with some regularity, it all feels rather mundane.

Not only is Kid Gladiator bored, but he is picked on by his teachers and classmates alike. Being, along with his father, the last of his species, Kid Gladiator has no one to relate to or speak to. At the Jean Grey school, everyone's powers made them equally unique, but at the Imperial Academy, there are whole classes of Smashers, Starbolts and Warstars. Kid Gladiator is a class of one.

The universe threatening assault by the Builders, covered in the pages of Infinity, seems to promise some release for Kid Gladiator as most students at the academy are called upon to serve as the Shi'ar empire enters the battle. That promise is left unfulfilled when Majestor Gladiator tells his son that he is not ready for war and must remain behind. Kid Gladiator has to decide whether to obey or break ranks with his father and his empire.

While the setting for Aaron and Bradshaw's story is suitably cosmic, at its heart its really a coming of age tale for Kid Gladiator. The isolation that Kid Gladitor has been experiencing seems to have given him a chance to mature, really considering the differences between his Shi'ar heritage and the family he was adopted into as part of the Jean Grey School. In doing so, he is also forced to examined himself and his own uniqueness and whether or not that is something he wants to quell in order to better fit into the Shi'ar Empire, or something he wants to embrace as he was taught to on Earth.

Considering the characters willfulness, his decision is not surprising. Even after the decision is made, Aaron continues to foster growth in the character by deepening the relationship between the boy and his father. The way Gladiator comes around to his son's point of view is the issues weakest point, mostly because its just not there. One one page, Gladiator refuses his son's request, and a few pages later, he embraces it, without any real explanation for what changed the Majestor's mind. Seems nothing brings a father and son together quite like interstellar warfare. Aaron does write their scenes well though, ably spotlighting both Gladiator's quiet strength as well as his love for his son.

The pacing of the issues is a little off balance, with most of the character work concentrated in the first half of the issue, and much of the second half being largely wordless panels displaying glorious space battles. Its hard to feel too bad about that though, since Nick Bradshaw draws those glorious space battles so well. Fan's of Wolverine and the X-Men will be happy to see the regular artist's work on the annual, bringing with it the same energy and sharp, cartoonish style as it brings to the regular series monthly issues, just as Aaron's dialog brings the same sense of playfulness and humor.

Judging this issue by its cover, its easy to dismiss it as an unnecessary and superfluous event tie-in. If you're coming to it because of the Infinity association, you'll be disappointed. It doesn’t move the event's plot forward in any way and it doesn't reveal any new secrets relevant to that storyline.

If you're a regular reader of Wolverine and the X-Men, however, this issues should not be missed. With the series ending in February, this annual was a great way for Aaron to tie-up a lose end and finish what he started with Kid Gladiator all of those issues ago. Its really more of a Kid Gladiator solo comic than it is an X-Men book, but that's okay. Aaron has fully fleshed out Kid Gladiator's character and personality in a way that makes him a pleasure to read about. Hopefully, even with Wolverine and the X-Men ending, this won't be the last we see of him.

Wolverine And The X-Men Annual #1 Review