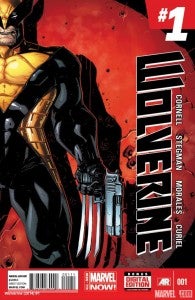 Yesterday, we speculated that the new series from Paul Cornell and Ryan Stegman's new "mortal" title was likely not a new title at all, but just a new chapter of Cornell's Wolverine storyline, picking up from the events of the "Killable" storyline. Turns out we were half-right. In February, Cornell and Stegman will relaunch Wolverine with a new costume, a new, darker direction and a new #1. And, like Green Lantern not long before him, a character with a bunch of super powers is inexplicably carrying a gun around on the cover. Following the events of "Killable," Wolverine finds himself reconnecting with his darker side in "Payback," an arc that puts the X-Man on the wrong side of the law, operating alongside some "minor-league super villains," as Cornell describes them. "The Offer is a minor super villain gang boss who has the power to make the best possible offer. It's not hypnotism; you're free to turn him down. But his offers tend to make people think twice. He's a caring, fatherly presence to his gang, but he's not really a good man," Cornell explained. "His gang includes Pinch, who Logan is in a relationship with, who can pull threads from any material; Fuel, who increases powers, and thus can make Logan move at high speed; and the Lost Boy, who can make anything ignite, and who has a complicated attitude towards what heroism and villainy might be. Logan worries about him." The new costume, according to Cornell, has a samurai influence, and Wolverine will be using guns more frequently and fighting hand-to-hand in a different way, using his claws less. " I don't know how much I can say, but there will be guns, and there will be claws," Stegman said. "There will be whatever Wolverine needs to get the job done—because he's the best there is at what he does."

Wolverine Gets a New Costume, New #1 in February