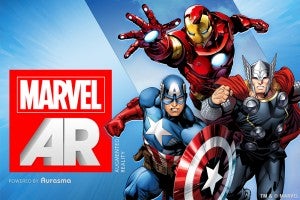 With last weekend's announcement that Marvel Comics would be rolling out augmented reality comics, an approach that melds digital with print by turning readers' tablets more or less into a venue for special features and creator's commentary on print comics, it's unsurprising that this afternoon's House of Ideas panel at WonderCon was all about digital.

Support for the existing direct market was a big part of Marvel's pitch today; Arune Singh, director of communications at Marvel Comics, told the audience that the company has no interest in killing the direct market, calling retailers the life's blood of the comics industry. Later, he criticized DC Comics for their policy of price-cutting digital back issues (after they're a month old, DC titles' prices in the ComiXology digital storefront drop by $1), saying that he didn't think the approach benefited retailers. Many other publishers, including Image and Dark Horse, participate in either the same or strikingly similar digital policies, and while Marvel themselves do not, they have a standing 99 cent sale at ComiXology on Mondays which allows readers to buy a wide variety of Marvel titles for pennies on the dollar, or at least quarters.

Infinite Comics #1, the Nova-centric Avengers Vs. X-Men tie-in that will be written by Mark Waid and feature Stuart Immonen's art, will be the first augmented reality comic to be featured on the Marvel ReEvolution App, available on April 2. While Marvel conceded that it may be possible to point your iPhone or tablet at a digital screen and gain access to the special features, they stressed that fans should just buy a paper copy of the comics, which comes with a free digital code, and gain access that way. Singh described the program as an evolution in both print and digital comics, which will allow both media and both segments of the market to expand and improve.

They had a few copies on hand for members of the audience to check out and comment on, leaving the rest of the room in the dark as to the content but allowing panelists to interact with those audience members on a practical level, making the conversation feel a bit less like a lecture.

Waid himself is putting his money where his mouth is with regard to digital comics; Bleeding Cool is reporting that at his own, separate panel later in the day, he announced that he would be selling his physical comics collection to help finance the digital-first publishing operation that he's entering into with Leverage creator and former Blue Beetle co-writer Jon Rogers. 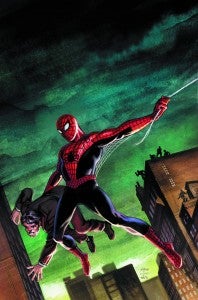 Marvel did say, in response to a fan question at the panel, that back issues will not be supported for the foreseeable future, although they wouldn't rule out going back and making special features available on older material. Certainly there would be an advantage to that, in a world where much of Marvel's classic material was created by men who are advancing in years and whose insights may not be available to the next generation of fans. The company is certainly not averse to utilizing their older material in a variety of ways; June's solicitations revealed to fans that Spider-Man's first appearance in Amazing Fantasy #15 will be reprinted, recolored and "remastered" later this year by Jean-Francois Beaulieu, who tackled Marvel's Wizard of Oz comics.

Fans at the panel had a number of questions, not least among which was whether Marvel's long-standing Digital Comics Unlimited plan (which was compared by a panelist to Netflix for comics, with the notable difference being that comics are cooler than movies and so Marvel's Digital Comics Unlimited is by implication a better product) would eventually be integrated into the Marvel app for fans who use it to have a more seamless access to their Marvel digital library. Singh told the fan that while it's something they've looked into, and will likely eventually happen, it's more complicated than it seems and that they want to make sure it's done right.