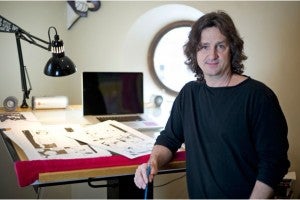 creator Jeff Smith will launch a new webcomic, set for eventual publication in trade paperbacks by Scholastic, who distributed the Bone graphic novels, according to his Spotlight panel at WonderCon. Bleeding Cool reports that Smith will launch a new webcomic titled Tüki Save the Humans, which will focus on the first human to leave Africa during the Ice Age. Everyone is trying to stop Tüki from doing so, though – "the Animal spirits, other humans, and more," says the report. Smith, whose Bone and Rasl were both published in black and white either first or exclusively, is hoping to publish Tüki Save the Humans in color, since printing costs are not a factor for webcomics. He says that he'll bank six months of material to be sure he stays on schedule, before launching a weekly webcomic that will eventually see print as chapters or arcs.