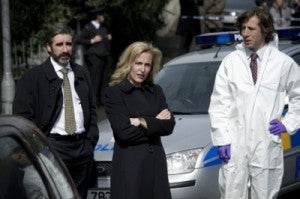 , a five-episode series produced by the BBC and starring X-Files star Gillian Anderson, will be streaming exclusively via Netflix in the U.S. beginning on May 28, reports Deadline. A psychological crime thriller, the series stars Anderson as Detective Superintendent Stella Gibson, who is drafted in from the London Metropolitan Police to review an unsolved, high-profile case. The local police are under increasing pressure to make an arrest but they have no suspects. The truth is that while the Police Service of Northern Ireland have investigated many sectarian murders over the years they have never had experience of a sexually motivated serial killer. Gibson has. She puts herself forward to head a Task Force dedicated to bringing the killer to justice. While she senses hostility as an outsider she brings with her the knowledge of how certain kinds of serial predators hide in plain sight. You can check out interview clips with the cast via the official BBC site, and a trailer for the series below.