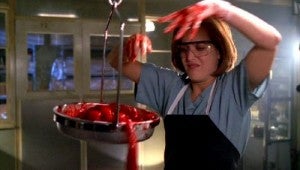 In an interview promoting his  just-ending BBC series Hunter, along with an HBO equivalent set to launch soon, veteran TV producer Frank Spotnitz admitted that, while he knows what the plot would be for the third and final X-Files movie were it to be greenlit, he hasn't yet written a script and the status of the film is unclear.

That said, Spotnitz--who co-wrote The X-Files: I Want to Believe and a DC/WildStorm comic book series based on the show--also told Den of Geek that he wouldn't be surprised to see 20th Century Fox reboot the whole thing as a new TV show with a different creative staff.

"I wouldn’t be surprised at all. I mean, I don’t think I would have anything to do with it but you know, for better or for worse, these things are titles of big corporations , like Star Trek belongs to Paramount and The X-Files belongs to Twentieth Century Fox and it’s a huge asset in their libraries so I can’t imagine they would let it sit languishing forever," Spotnitz said.

While the second movie was far better received than the first, it still didn't make the kind of money the studio or the fans had hoped would come from the resurrection of such a beloved franchise; it's long been thought that a third film is unlikely, at least in the short term. The idea of a reboot, of course, comes with both benefits and inherent danger; as much as some fans may like to see a return to the characters and concepts, minus some of the baggage of the '90s TV series, any attempt to rebuild the franchise without stars David Duchovny and Gillian Anderson would likely be seen as little more credible than the later seasons of the original run, in which one or both of those actors wasn't present and the chemistry was just never the same.

While Spotnitz would like to get the third movie done and conclude the alien colonization plot that the series ran with for years, he told Den of Geek that he'd be alright with anything, provided it didn't tarnish the franchise.

"Anything could happen," Spotnitz said. "I just hope that if they do it, they do it well, that’s my only request."

X-Files To Be Rebooted? Producer Frank Spotnitz Seems to Half-Expect It

Attack on Titan Manga Finale Sells Out Magazines in Japan

Over 475,000 Call of Duty: Warzone Accounts Have Been Banned