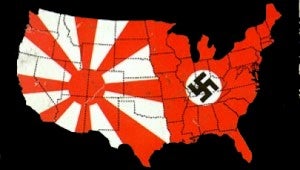 Longtime X-Files writer Frank Spotnitz has signed on to adapt Philip K. Dick's The Man in the High Castle for Syfy. The adaptation, which began at BBC years ago, will be a four-episode, four-hour miniseries and is set to be produced by Ridley Scott under his Scott Free Productions banner, says Deadline. Spotnitz will write the first two episodes and serve as a script supervisor on the other two, in addition to being a producer on the whole miniseries. The story, from the writer of Do Androids Dream of Electric Sheep? and Total Recall, set in 1962, takes place in an alternate timeline where the Axis Powers won World War II. The Japanese and German forces have occupied the U.S. and the few surviving Jews are in hiding under assumed names. Scott, of course, adapted Do Androids Dream of Electric Sheep into Blade Runner, widely regarded as one of his best films.