The cast of X-Men: Days of Future Past is still busy on tour for the “X-Men X-Perience” series of international premieres for the film. The tour stopped in Melbourne, Australia recently, which was something of a homecoming for Australian actor Hugh Jackman.

While at the premiere, Spotlight Report asked an incredibly appropriate question: would Jackman like to do an X-Men film adapted from the X-Men’s time living in the Australian Outback?

Jackman had no idea that the X-Men had ever set up shop in Australia, but seemed interested in the idea when he was told about it. 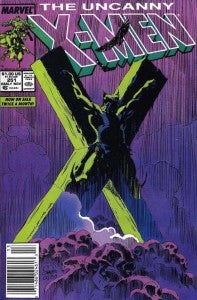 “That’s a great idea. I’m so gonna read those, thank you for that! I’d love to film that,” said Jackman.

For those as unfamiliar as Jackman, the X-Men – with a lineup that consisted of Storm, Wolverine, Colossus, Longshot, Havok, Rogue, Psylocke, and Dazzler, aided by the mysterious Gateway and eventually introducing Jubilee – faked their own death during the Fall of the Mutants event in the 1980s. The team left the ruined Xavier Mansion behind and relocated to an abandoned town in the Australian Outback after wrestling control of it away from the cyborg mercenaries known as the Reavers.

The team remained in Australia for about two years (publishing time) and writer Chris Claremont was able to have them partake in adventures across the world thanks to Gateway’s teleportation powers. During this period, the team had iconic battles with the Brood and a continued rivalry with the Reavers that would result in one of the most iconic X-Men covers of all time, Uncanny X-Men #251, depicting Wolverine hanging from an x-shaped crucifix.

The Outback Era is fondly remembered by many X-Men fans for its unique lineup, consisting of mutants often relegated to b-list status today, as well as it’s unique, Mad Max-esque setting, often dark tone, the introduction of Mr. Sinister as a major villain, and the art of superstars like Marc Silvestri and Jim Lee.

The next film in the X-Men franchise, X-Men: Days of Future Past, comes to theaters May 23.